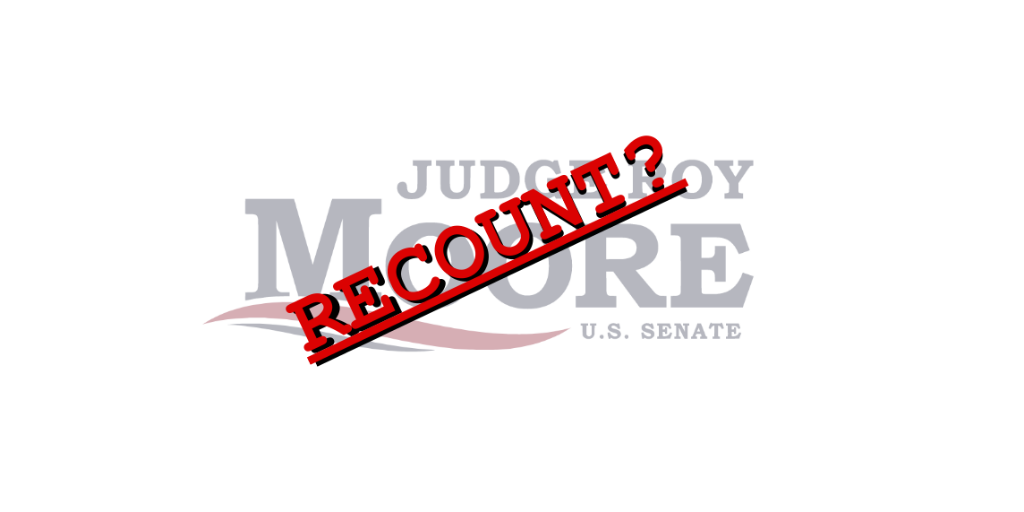 This week Democrat Doug Jones upset Republican Roy Moore to win Alabama’s special election for the U.S. Senate. Moore, however, has not yet conceded and has indicated that he may seek a recount. Jones and Moore are currently separated by a margin of 20,715 votes – 1.5 percent of votes counted, above the 0.5 percent margin necessary to trigger an automatic recount under Alabama law.

Putting aside the issue of whether Moore can even legally request a recount, FairVote’s data show that a statewide recount would not change the outcome of the election absent massive and systematic errors or fraud. Last year, FairVote released a report surveying all statewide recounts in the country from 2000 to 2015. Out of 4,687 statewide general elections in that period, only 27 led to recounts and, of those, only three changed the outcome of the election – but all significantly closer in the first tally.

Applying either of these numbers to the Alabama election, the margin shift would be far below what is needed to change the outcome. Under the average margin shift of all recount elections examined (0.0191 percent), there would be a change of just 257 votes. Under the average margin shift in elections roughly the same size as Alabama’s (0.0188 percent), the difference would be 253 votes – well below the 20,716 needed to change the outcome of the election. This means that Moore would need a margin shift in his favor over 80 times bigger than average.

Alabama had two statewide recounts between 2000 and 2015. In 2004 and 2006, two ballot measures to amend the state constitution fell within the margin to trigger an automatic recount. In 2006, a recount led to a shift of 508 votes (or 0.0622 percent of all votes counted). This shift actually increased the lead of the winning side, which is a reminder that recounts don’t always benefit those seeking them. As our report observed: “Errors in the 27 recounts were just as likely to increase the initial victory margin as reduce it.”

Finally, there was one recount in a U.S. Senate election in the period surveyed that resulted in a different outcome. In 2008, the results of the race between Al Franken and then-Senator Norm Coleman were close enough to trigger Minnesota’s automatic recount law (which, like Alabama, required a margin of less than 0.5 percent). In that case, the original margin between the candidates was just 215 votes (or 0.009 percent of votes counted). After the recount, Franken led with 225 votes (a total change of 440 votes, or 0.0182 percent of votes cast). If a recount in Alabama sees the same margin shift as the 2008 recount in Minnesota, we would only see a change of about 244 votes – nowhere near what Moore would need to change the outcome of the election.

The data show that statewide recounts are rare, and recounts that actually change the outcome of an election are rarer still. There can be other reasons to ask for for recounts, such as exposing problems in election administration or potential fraud. But if Moore hopes a recount can get him a Senate seat, he is likely to be disappointed.