As part of its Monopoly Politics report, FairVote has calculated that, controlling for candidacy effects, the underlying national two-party preference of the nation this November was 52% for the Republican Party and 48% for the Democratic Party.This paints a picture of a closer election that the nation-wide two-party vote tally of 53% (R) to 47 % (D). FairVote's underlying national two-party preference is a better measure of the partisan sentiment of the nation in 2014 because, unlike the two-party vote tally, it controls for external factors unrelated to partisan sentiment like the number of incumbents running and the number of uncontested seats.

Our methodology is explained in more detail on the Monopoly Politics website, but it can be briefly outlined. We begin with the an average election, in which the two-party vote is split 50%-50% between the two parties. Then we calculate the 2014 election's deviation from that.

Firstly, we exclude uncontested races and open seats. These races could unduly skew our calculations about voter sentiment.  Then we compare each district's two-party vote tally in the US House in 2014 against the district's two-party vote tally in the most recent presidential election (2012). The two-party vote for president is an imperfect indicator of a district's underlying partisanship, yet it is the best we have available at the district level. Other measures, such as partisan affiliation from registration records or survey data, are less reliable because (in the former case) they include scores of registered voters who did not vote --more than half in 2014 -- or (in the latter case) they have high margins of error associated with small, district-level, sample sizes. 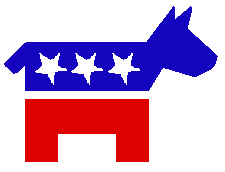 After we do this calculation, we are left with the raw performance of the candidate relative to the district's partisanship.  For example, in Maryland's 5th District, Steny Hoyer (D) received 64.0% of the two-party vote in his district in 2014. In 2012, President Obama (D) received 65.0% of the two-party presidential vote in MD-5. And so, Hoyer's performance was 1% less than the partisanship of his district.

In comparing the Republican incumbency advantage over the Democratic incumbency advantage we get a better  measure of how the American electorate viewed the two parties. This is because our measure of partisan preference controls for the effects of incumbency, the fact that there were more Republican incumbents and the greater number of uncontested races for Democratic incumbents. The raw two-party vote numbers are affected by all those factors, which are unrelated to partisan sentiment.

It is interesting to note that 2014 is almost a mirror image of the 2012 election. In 2012, the underlying national two-party preference of the nation was 52% Democrat to 48% Republican. However, a key difference is that in a 52% year for the Democrats (2012), the party won only 46% of all US House seats.  By contrast, in 2014, in a 52% year to the Republican Party, Republicans picked up 56% of the House seats. This bias against the Democratic Party in the US House is alarming,  and is discussed in more detail here.