Champions were born and soccer history made last night in the semifinals of the U.S. Women’s World Cup, as the United States blew past Germany to secure a 2-0 victory and advance to the Finals on Sunday. FairVote has been joining in the excitement surrounding the Women’s World Cup this week by running a poll on the most valuable player on the Women’s World Cup Team, using ranked choice voting (RCV). After last night’s game-changing goal from power midfielder and team captain Carli Lloyd, we wanted to add her to our poll and give U.S. women’s soccer fans everywhere a chance to celebrate her leadership and goal production on the team. You can vote for Carli and her teammates using RCV to rank your favorite players in order of preference. Since RCV allows for more “candidates” and more choice on behalf of voters, Lloyd’s entry into the race won’t keep fans from determining a majority winner, but will certainly make for a more interesting race. For now, you can see the results of the poll without Carli Lloyd, and get a complete picture of how voters ranked the players. In our previous poll, Abby Wambach got the most first-choice votes as the most valuable player on the team. With RCV, the MVP is determined by eliminating the players with the fewest and transferring votes to the voter’s second choice. On the results page, you can see how the votes are transferred when each lowest vote-getting player is eliminated. Players like Abby Wambach and Hope Solo picked up support in each round. For example, when Alex Morgan was eliminated in round three, her six supporters were distributed among Hope Solo, Megan Rapinoe, and Abby Wambach. The beauty of using RCV is that when Megan was eliminated for having too little support, those voters still had an opportunity to have their vote count. 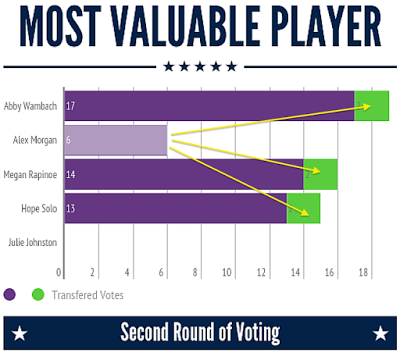 Throughout the rounds of voting, Abby Wambach’s broad support among voters allowed her to maintain and strengthen her lead, and she ended up winning the poll with 22 of the 42 votes cast. The secret to Abby’s success in this poll was her strong first choice support combined with a broader coalition of supporters who listed her as their second or third choice. Her victory in this poll shows how candidates succeed with a wide coalition of supporters when using RCV.
When voters get to rank candidates, they have more choice in the election and the winning candidate has a stronger mandate to lead, or in this case, a stronger mandate to score a couple of goals in the World Cup Final. On Sunday, the US Women’s team will take on either Japan or England in the final.
Take our new poll to vote for your favorite player before the game on Sunday. Go Team USA!
Quick news