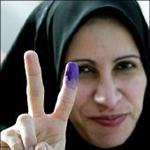 Iraq today began early voting in its second ever proportional voting election, designed to improve upon last January's constitutional convention elections. In this round of elections, Iraq's 18 provinces (or governorates) will elect members of parliament in multi-member superdistricts using a proportional voting method. Under the new system, 230 of 275 seats are allocated to each province based on the province's population, and parties are awarded these provincial seats in direct proportion to their vote in each province. The 45 remaining seats are awarded to smaller parties that did not win seats in any given province but nevertheless won a significant numbers of votes nationally.

A key benefit to this new system is that a group like the Sunnis have a chance to win a fair share of seats - even if fear or discontent drives down turnout a bit. When Iraqis elected delegates to their constitutional convention last January under a national party list system, Sunni Muslims boycotted the vote. Despite comprising about a third of Iraq's population, Sunnis won few seats. For example, the powerful Sunni Iraqis Party garnered only five of 275 seats. Using regional lists will ensure greater Sunni representation this December.

Iraq's electoral system has other features designed to ensure fuller participation and representation:

UPDATE: Check out the Washington Post's map and guide to Iraq's elections. Includes overviews of the election system, regional demographics, key players and how seats are allocated.