As the movement for ranked choice voting gathers steam around the country and its successes mount, we’ve of course had to contend with critics. Usually, these detractors are defenders of the status quo, those who see no problem with our current plurality voting system. There are fewer of these critics all the time, as the number of people who are happy with the electoral system in the US, with its divisive politics and limited options, appears to be dwindling.

However, a small but vocal faction of online critics aren’t defenders of the status quo, but proponents of other alternative voting systems. Their proposed alternatives vary — some have been known about for centuries, others they invented just last week — but what these proposals share is a lack of success in the context of real-world, competitive elections. Curiously, that fact doesn’t seem to bother their proponents. “The great tragedy of science,” Thomas Huxley noted, is “the slaying of a beautiful hypothesis by an ugly fact.” These critics love beautiful hypotheses on blackboards ... but true science, grounded in real-world experience, not so much.

Take backers of “approval voting.” Use of approval voting in competitive elections is limited, but what exists is rife with Huxley’s “ugly facts.” Case in point: elections for the Dartmouth College Board of Trustees. The Dartmouth Alumni Association used approval voting for the trustees elections for several years, but its problems eventually became too much to bear. In a 53-page report authored in 2007, the alumni noted that approval lacks a “runoff mechanism to determine a majority winner” and “permits a form of tactical voting referred to as “bullet voting,” wherein voter vote for just a single candidate. As The Dartmouth newspaper later pointed out, bullet voting rewarded a minority faction at the expense of candidates with majority support. In 2009, alumni voters voted 82-18% to abandon it.

As the saying goes, those that don’t know history are doomed to repeat it. And so in 2011, the Dartmouth elections committee, chaired by a fervent but well-meaning advocate of approval voting, summarily switched their student government elections from ranked choice voting to approval. Six years later, the results are telling:

We’ll take a look at the data, but first a little background and theory on approval voting.

Here’s how approval voting works. Unlike RCV, voters aren’t allowed to rank their choices in order of preference under approval. Instead, they can vote for as many candidates as they like, but each vote has equal weight. Then the candidate with the most votes wins. This works well-enough for low-stakes decision-making like choosing, say, where to go for lunch. And at first glance, it may seem simple to use for high-stakes elections, too.

However, that superficial “simplicity” quickly fades once your try to fill out an approval ballot in an election that really matters to you. A voter presumably votes for their first choice. But do they vote for their second choice? Their third? When should the voter stop “approving” exactly? As Professor Richard Niemi recognized over two decades ago, that question is inherently a strategic one: “approval voting leaves so much ambiguity that voters are almost begged to think and behave strategically." A quick thought experiment: there are 5 candidates on your approval ballot, and you vote for 2 of them. Now rerun the election in your mind between just the 3 candidates you did not vote for. Do you vote for none of them, effectively abstaining from the election? Of course not. In a high-stakes election, an approval ballot isn’t a sincere assessment of “approval”; it’s a tactical weighing of outcomes.

The strategic burden a voter faces under approval in competitive elections is further complicated by the incentive to bullet vote. Unlike RCV, approval voting puts the voter in an obvious predicament: voting for one’s second choice on the ballot hurts the chances one’s first choice is elected. As a result, many voters will use just a single vote so as not to dilute the strength of their first vote. With enough bullet voting, approval elections will resemble regular plurality elections, and our current system’s most glaring flaws will remain in tact: the election of candidates without majority support due to votes being divided among similar candidates, as well as the limitation of choices and shaming of “spoilers” to prevent this from occurring.

As you can see in Figure 1, the vast majority of voters in these elections cast bullet votes, as if it were a plurality election. Each interval bar in the graph indicate the minimum and maximum frequency of bullet voting that occurred, ranging from a lower bound of 78% in 2012 to an upper bound of 98% in 2016. As a result, we see familiar plurality results: in none of those 5 elections did the winner crack 50% support, measured as a percentage of all ballots counted toward the winner.

Let’s take a closer look at the 2012 election, which featured 5 candidates for president. The winner was Suril Kantaria with 712 votes, followed by Erin Klein with 705 votes, J.T. Tanenbaum with 701 votes, Rachel Wang with 335 votes, and finally Max Hunter with 281 votes. Imagine you’re a voter in this election and your first choice is Tanenbaum, second choice is Klein, and your last choice is Kantaria. How do you vote? Do you vote for both Tanenbaum and Klein to stop Kantaria? Or do you wager that Klein and Tanenbaum will be in the top two regardless and bullet vote for Tanenbaum? That’s the kind of strategic game voters have to play under approval voting. In the end, Kantaria won despite appearing on only 32% of the 2,239 ballots cast. Whether he could have beaten Klein or Tanenbaum head-to-head is not clear. In fact, if 32% was his “ceiling” of support, he could have lost to every candidate head-to-head, making him what voting theorists call a “Condorcet loser.” 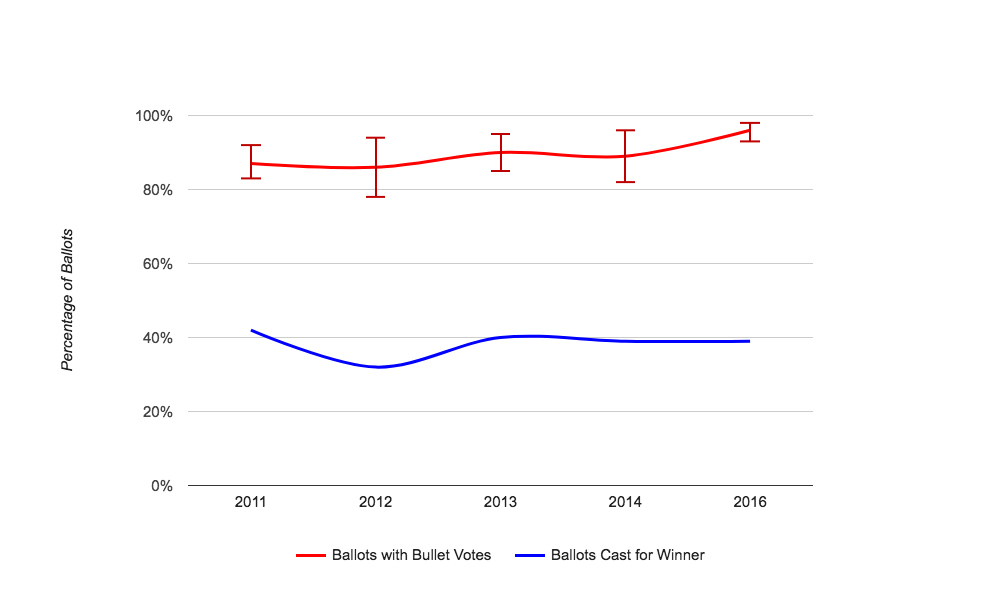 To understand whether these problems are endemic to this kind of student election, it’s instructive to compare the experience with approval voting to the way Dartmouth voters interacted with ranked choice voting, which was used in the 6 prior student elections (2005 to 2010). With RCV, voters can indicate support for more than one candidates, but unlike approval, indicating second and lower preferences has no impact on one’s first choice. The result: winners under RCV accumulated more votes and a higher percentage of ballots than did winners under approval. As shown in Figure 2, the demonstrable support for election winners fell with the adoption of approval in 2011.

Perhaps more telling is a comparison of the levels of “top two participation” between Dartmouth’s approval and RCV elections. By “top two participation” we mean the percentage of ballots that had an impact in determining which of the top two frontrunners ultimately won. With approval voting, that number includes all ballots cast for either of the top two vote-getters but not those that voted for both. These are the only voters who have the opportunity to influence which of the two front-runners win. While voters who voted for both helped them become front-runners, these voters are denied the opportunity to decide which of the two win, an opportunity they would have under any kind of runoff election, including the “instant runoffs” in ranked choice voting. 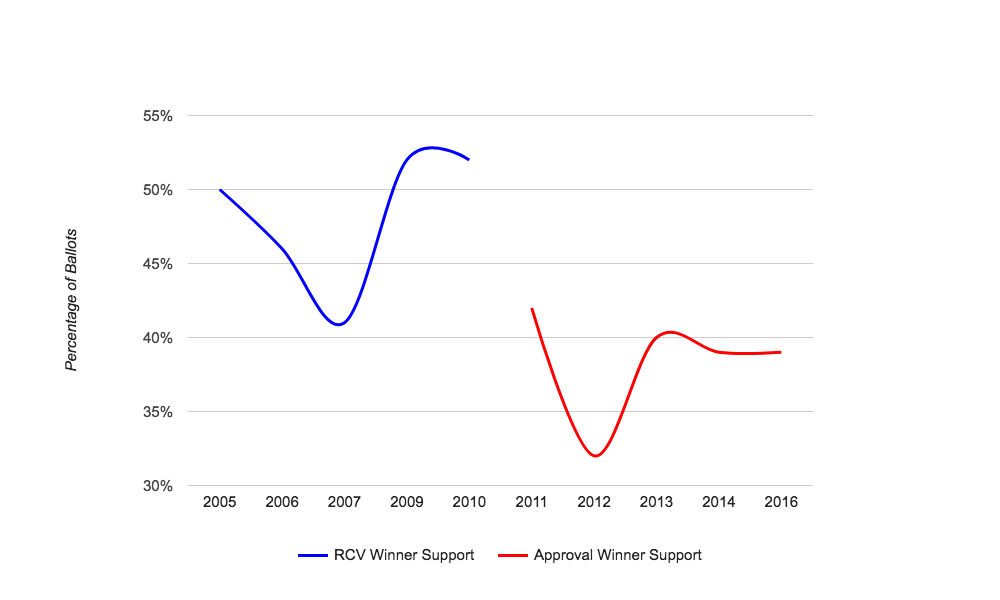 With RCV, the number includes all ballots that rank either of the two frontrunners, including those that rank both. Given RCV election results, we know the exact top two participation rate whenever the final round of the tally includes exactly two candidates, which it did in all years except 2009. For the 2009 RCV election and for all approval elections, we calculated upper and lower bounds on top two participation.

As shown in Figure 3, the top two participation rate was very high under RCV, with nearly all ballots differentiating between the top two vote-getters. That rate fell significantly with the adoption of approval. In fact, in 2 of the approval voting elections, potentially fewer than half of all voters determined which of the frontrunners emerged victorious. That drop is easily explained. Under RCV, one need only rank all the candidates to ensure their ballot stay in play until the very end. Under approval, the voter must strategically guess which vote will impact that frontrunner decision — a guess that can easily be wrong. 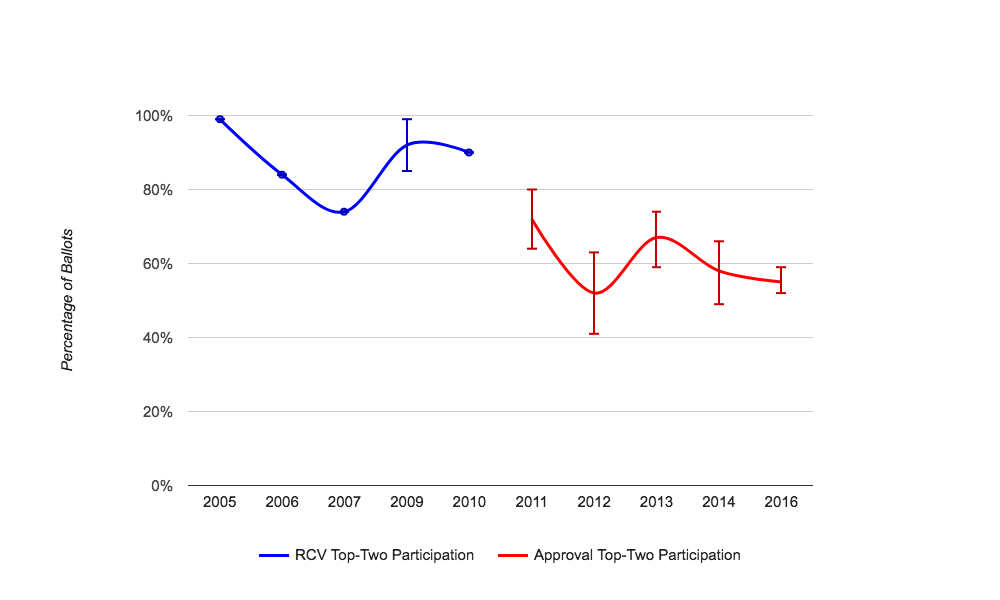 While it’s disappointing for advocates of ranked choice voting to see any application of it replaced, even just a student government use, Dartmouth’s switch to approval voting did provide another opportunity to study, and ultimately validate, our claims about the method. Approval is fine for making low-stakes decisions, but in competitive elections voters strategize and bullet vote. As a result, candidates win without any clear mandate, and the outcomes differ insignificantly from plurality voting.

In fact, as of 2017, Dartmouth may have stopped using approval voting altogether for their student government. The results from their most recent 2017 election suggest that either everyone bullet voted, or that it was simply a plurality election. Dartmouth was unable to confirm to me either way, and the student newspaper mentions no such change to plurality. Given how little approval and plurality results seem to differ, perhaps it’s not surprising that a transition to plurality went undetected and unreported.

There have now been two real-world experiences with approval voting at Dartmouth — elections to the Board of Trustees and student government elections — and both suffered from to the same problems: bullet voting and non-majority outcomes. The first of these uses was eventually abandoned; the second seemingly so as well. And yet approval voting advocates remain undeterred. Without a documented success under their belt, they’re calling for approval to be used in even more elections, including elections to local, state, and federal office. Ugly facts be damned.