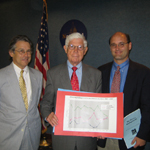 FairVote’s new report, The Shrinking Battleground: The 2008 Presidential Elections and Beyond, provides a devastating critique of the Electoral College and its impact on American politics. Fewer and fewer Americans play a meaningful role in electing their president, with a damaging impact on voter turnout, racial fairness and political equality.