We are on the precipice of one of the worst redistricting bloodbaths in American history. Today the U.S. Census Bureau released data to let states draw Congressional and legislative maps that will shape politics for the next decade. States across the country - right, left, and center - are getting ready to gerrymander. Here are just a few examples of how redistricting battles are likely to unfold.

The Brennan Center for Justice flagged both of these states among those at the highest risk of gerrymandering. They have experienced rapid population growth - especially in blue-leaning cities and suburbs - but Republicans have full control of the redistricting processes.

In Georgia, that means Republicans could seek to dilute the power of voters in the Atlanta area by combining two incumbent Democrats into a single district and forcing them to run against each other. Changing the lines that way would move this narrowly-divided swing state from an 8-6 GOP edge to a 9-5 GOP lead.

GEORGIA: Despite Dems' 2020 triumphs, GA Rs still control state gov't & redistricting may be their last chance to reverse the slide.

Meanwhile, Texas is set to gain two seats because its population has grown substantially since 2010. Even though the fastest growth has come from liberal urban areas, the new seats are likely to become red anyway due to gerrymandering. Texas legislators are looking for new ways to pack thousands of Democratic-leaning voters into a few districts, and crack others between the remaining mostly-red districts. Some party leaders have even been open about their desire to gerrymander Democrats out of power.

“The next vital play comes with the redistricting of political office districts that only comes every 10 years… Texas Republicans control this process and must realize this strategic opportunity, and not concern themselves with ‘fairness’ to the progressive socialist left.” - Former Texas Republican Chair Allen West

New York and Illinois are each set to lose one district, and Democrats in their state legislatures would love to make sure that the Congressperson who loses out is a Republican.

New York uses a redistricting commission to draw the lines, but the legislature can theoretically reject those maps and draw lines themselves, effectively giving Democrats free reign to draw the map as they see fit. One possible target for elimination could be Elise Stefanik (R) of upstate NY, who recently became one of the Republican Party’s top leaders as House Conference Chair.

Democratic legislators in Illinois are having conversations about which of the state’s Republicans they would most like to remove. Rep. Rodney Davis (R) and Rep. Adam Kinzinger (R) has both been flagged as potential targets.

In FairVote’s home state of Maryland, Democratic lawmakers might try to turn the state’s current 7-1 Democratic map into a shutout with no Republican members, despite the fact that about a third of Marylanders lean Republican. Democrats could do that by cracking the conservative Eastern Shore into two separate districts combined with blue suburbs, making Republicans a minority in both.

I live in Maryland. It is among the most notoriously gerrymandered states, and often cited as an example of gerrymandering done by and for Democrats.

Republicans are reportedly considering similar plans in Kentucky and Kansas, which each currently have one Democratic House member. In Kentucky, legislators would simply split liberal Louisville between two or three otherwise rural districts.

The Bottom Line: There’s a better way to vote

Thankfully, the Fair Representation Act (FRA) in Congress right now would fix this broken process by implementing proportional, multi-member districts in U.S. House elections. That would give every voter a chance to elect members of their choice, even if they are in the minority in their state.

The FRA would handle all of these states more fairly. With proportional representation, Maryland Republicans and Kentucky Democrats would all get a chance to elect members of their choice to Congress, no matter how the district lines are shaped. 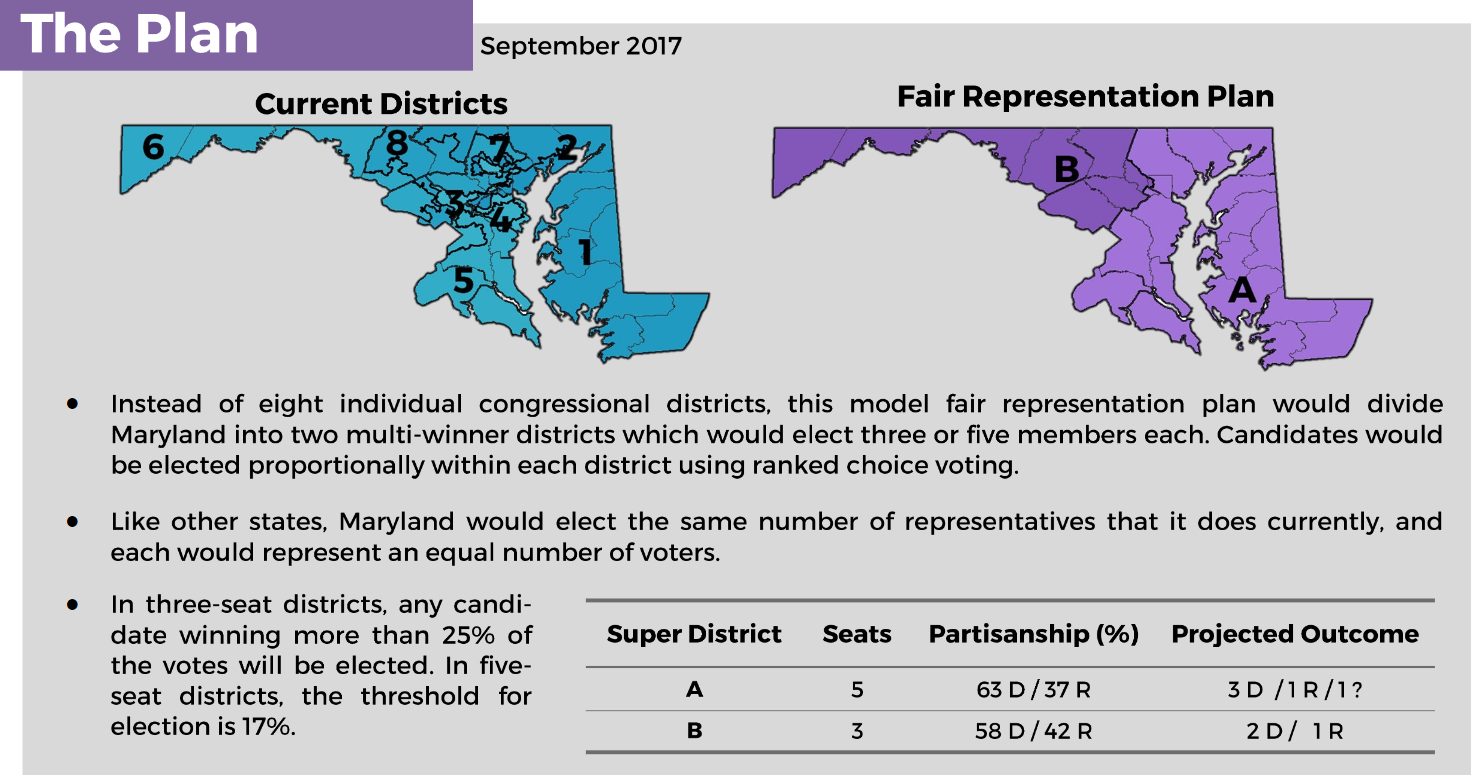 [The above example maps are from a 2017 project showing how the Fair Representation Act could improve redistricting in states. They are meant to be educational only and are likely different from how the actual districts would look under the FRA]

If you want to help the FRA pass, contact your legislators here.