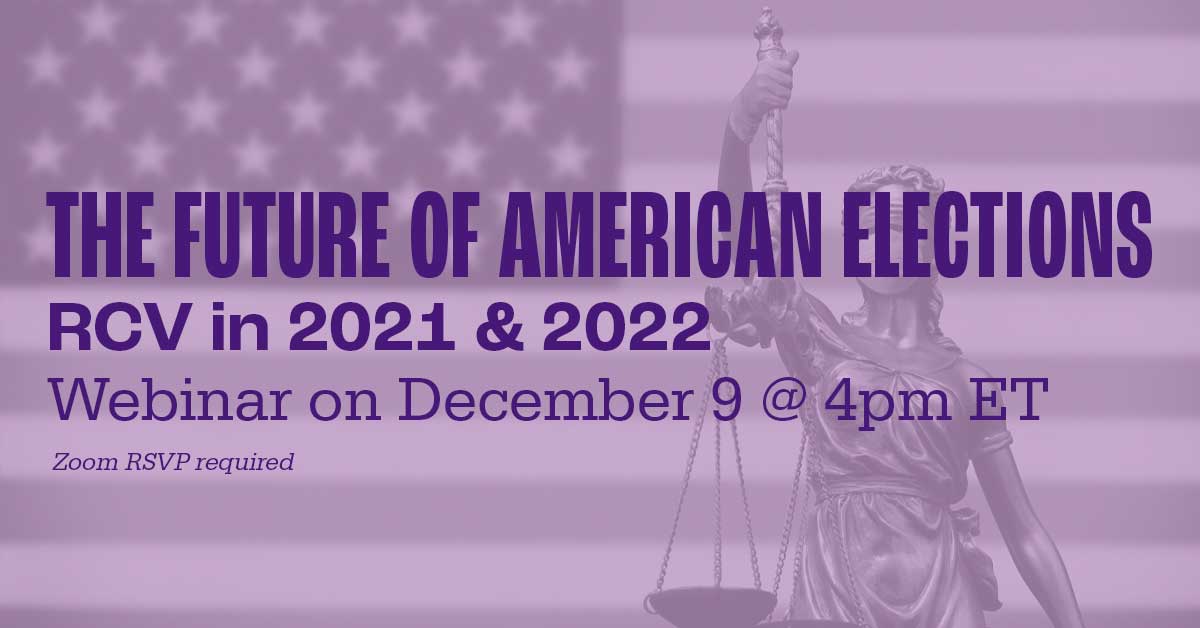 Ranked choice voting is the fastest-growing nonpartisan voting reform in the country, now in 50 jurisdictions with nearly 10 million voters. Activists have led the charge to enact ranked choice voting from Maine to Alaska, improving voter choice and engagement in their local elections.

On December 9th, we hosted our end-of-year webinar with local election reform leaders from: 
Susan Lerner is the executive director of Common Cause/New York, where she has served since December 2007. Passionate about voting rights and accessible, reliable, and secure elections, Susan is a founder of Let NY Vote, a statewide coalition that has successfully advocated to bring transformative election reforms, such as Early Voting and Automatic Voter Registration, to New York State. She heads Rank the Vote NYC which is conducting a citywide voter education campaign following its success in placing and passing Ranked Choice Voting on the November 2019 NYC ballot.  Susan writes and speaks extensively on voting rights, election reform, campaign finance, redistricting, ethics, transparency and other good government issues, and is a go-to source for reporters and editorial board writers throughout New York State on these issues. A former litigator, Susan is a member of the New York and California bars. 
Sean Dugar is a political and non-profit consultant with two decades of experience. Sean has worked with a number of nonprofit “Good Government” and social justice organizations organizing around issues such as police accountability, expanded access to the ballot box, and voting systems like Ranked Choice Voting (RCV).

To date, Sean has worked on or managed over a dozen candidate and issue campaigns, including coordinating Democratic Party and African American outreach for California State Treasurer John Chiang, organizing faith conversations in support of marriage equality, rallying Bay Area communities in opposition to the death penalty and in favor of criminal justice reform, as well a campaign that registered over 10,000 new voters in Alameda County in 2004. 
Stan Lockhart is an independent consultant who works with clients to grow their businesses and navigate the complexities of government. He has worked in the technology field for over 30 years in computer security and semiconductor manufacturing and been instrumental in bringing thousands of jobs to Utah. Stan is a recipient of the prestigious “Ronald Reagan Award” for his service in the Republican Party, which he has served in virtually every grassroots position including chairman of the Utah Republican Party. He has served for decades on the Utah Republican Party State Central Committee. 
Eric Wilson is a political technologist driving innovation and digital transformation. He’s a veteran of numerous campaigns, having led Marco Rubio’s digital team during his 2016 campaign for president, served as digital director of Ed Gillespie’s campaign for Virginia Governor in 2017.

Eric is the managing partner of Startup Caucus, an investment fund and startup accelerator for Republican campaign technology.