FairVote has compiled and analyzed state-by-state data on voter turnout for the 2016 presidential primaries, using data from FairVote’s comprehensive Popular Vote Totals 2016 spreadsheet that tracked votes cast in primaries and caucuses during the 2016 nomination contest, and from the Dr. Michael McDonald at The United States Elections Project. Released today, it reviews trends in voter turnout nationally since 2000, as well as differences in turnout by party. Also included is a deeper analysis of the 23 states which held competitive primaries in both 2008 and 2016, exploring the effects of primary type (open, closed, or hybrid) and voter access laws. A full report can be downloaded from FairVote’s website.

More Americans than ever voted in the presidential primaries in 2016. Voter turnout rates were slightly down from 2008, the last election cycle in which both parties had contested nomination contests, with nationwide turnout dropping to 29 percent of eligible voters. (Estimates of eligible voters are from the United States Elections Project.) Almost all states, however, saw higher participation in Republican primaries and lower participation in Democratic primaries. Turnout data shows that more Americans than ever before participated in the 2016 Republican primaries. In summary, compared to 2008:

Turnout Decreased the Most in Open Democratic Primaries In closed primary states, there are a variety of restrictions on who is allowed to participate. Many states have very early party-change deadlines, for example, meaning voters must switch their party affiliation months before the election if they intend to participate in that party’s primary. Independents and unaffiliated voters are barred completely from casting ballots in closed primary contests. Because of these restrictions, turnout changes in closed primary states are likely due in large part to different proportions of party voters turning out rather than party switching or independent voters.

The increase in Republican turnout in these states indicates that voters who did not participate in the 2008 contests are turning out in 2016. Some are new voters, participating in their first primary; others are voters who voted Republican in the past, but stayed at home in 2008. Because unaffiliated and Democratic voters do not have access to Republican ballots in closed primaries, and the process of changing party affiliation often requires a good deal of planning and effort, the increase in Republican turnout in closed primary states is unlikely to be largely due to en masse party switching or unaffiliated voters affiliating, although there have been efforts encouraging people to “ditch and switch”. In Pennsylvania, for example, only an estimated 200,000 voters switched9 parties, representing about 2.5% of the 8,273,703 registered voters10 in that state.

In South Carolina, for example, turnout did not meaningfully change compared to 2008, while Republican turnout increased 47% and Democratic turnout decreased 39%. In 2016, the reduction in Democratic turnout in South Carolina was almost twice the national mean (23%) and national median (25%), suggesting that the drop in turnout is not entirely explained by the expected decrease in Democrats participating in the Democratic primary following Obama’s historic 2008 campaign. In 2016, South Carolina Democrats had good reason to turn out: the state voted immediately after Iowa and New Hampshire, when neither Hillary Clinton nor Bernie Sanders could claim a commanding delegate lead. After Clinton narrowly won Iowa and Sanders won by a landslide in New Hampshire, each candidate looked to solidify their momentum in South Carolina and Nevada.

In 2008, South Carolina was in a similar position, facing a high stakes choice between Obama and Clinton and a last chance for the campaign of John Edwards. South Carolina Democrats voted on January 26th, only the fifth state to cast Democratic ballots and, as in 2016, the third sanctioned contest. These comparably competitive positions on the primary calendar in both years make the drop in turnout for 2016 particularly stark in this state.

While differences clearly exist between open primary states and closed primary states, other factors are also at work contributing to the steep increase in Republican turnout and a decline in Democratic turnout in 2016. In addition to the type of primary used in a state, legal changes since 2008 may also help explain turnout differences between states and parties. 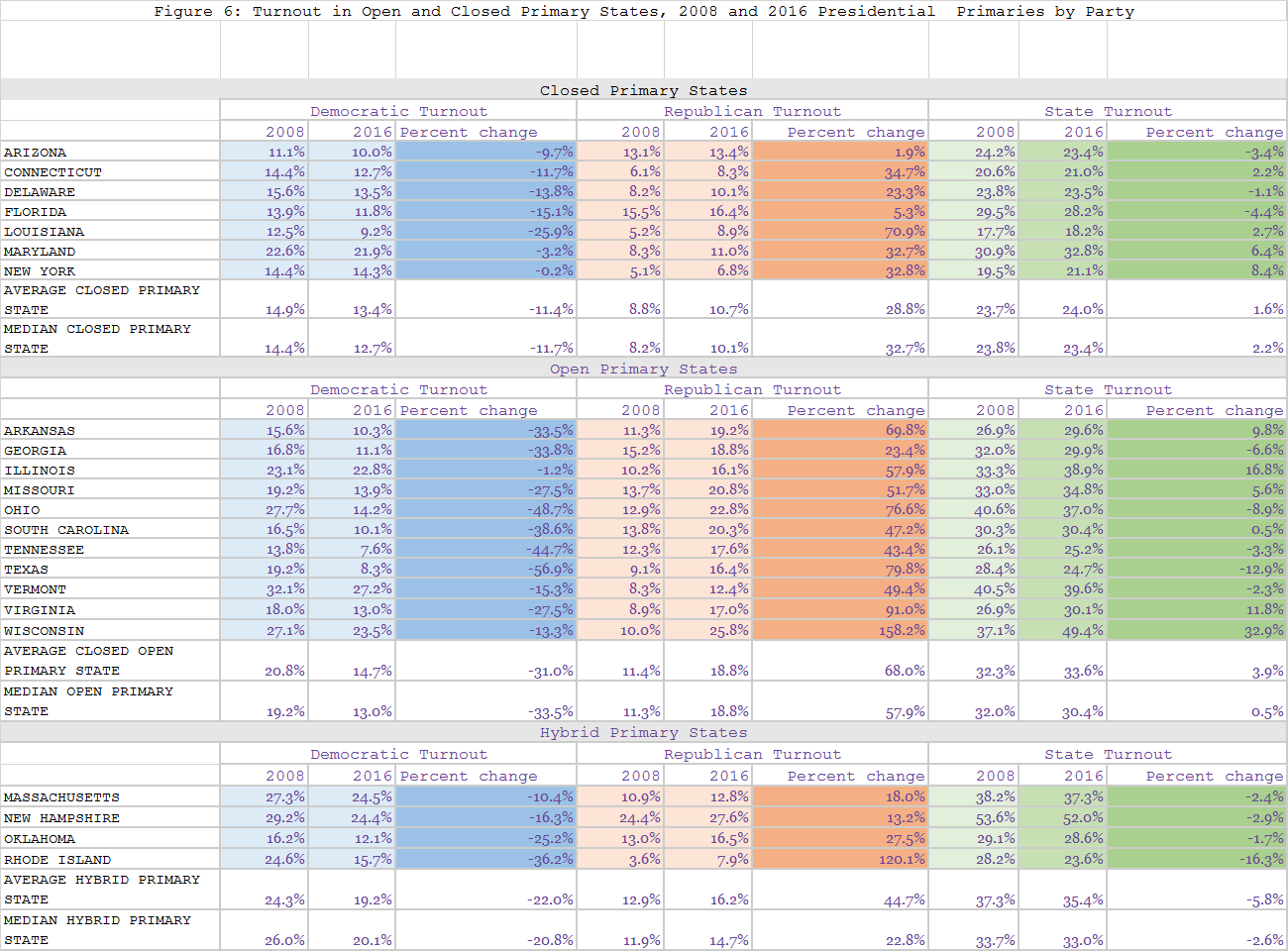