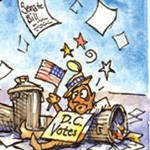 The Republican minority blocked the U.S. Senate from taking up the D.C. Voting Rights Act of 2007, a historic bill that would have given full voting rights to the citizens of Washington, D.C. Fifty-seven senators voted to end debate and take action on the bill, but fell just short of the 60 votes needed to overcome a filibuster organized by Minority Leader Mitch McConnell of Kentucky and Minority Whip Trent Lott of Mississippi. This marks the first time Senators have filibustered a voting rights bill since the era of Jim Crow.

The D.C. Voting Rights Act of 2007 was the closest the District has come in nearly 30 years to gaining full voting rights in the U.S. House. Their lone representative, Delegate Eleanor Holmes Norton, may speak for or against legislation but not vote on the House floor. The bill attracted bi-partisan support, with all but one Democrat and 8 Republicans voting in favor of cloture. FairVote partner, D.C. Vote, will continue to take the lead in securing a vote for the citizens of the District of Columbia.