Paul Ryan’s bombshell announcement last week that he would not seek re-election or another term as Speaker of the House made him the 38th Republican to call it quits this cycle. Note that eight additional Republicans have quit Congress entirely, rather than declining to run for reelection, meaning their seats have been or will be filled in a special election.

Thirty-eight incumbents from the same party retiring this early in the cycle was already virtually unprecedented as shown below, but by the end of the day last Wednesday, the list grew to 39 as Florida Congressman Dennis Ross decided to join Ryan and bow out. Neither retirement is currently expected to change our projections. However, both bring relatively safe seats closer to competitive status given a big enough wave. National Republican Congressional Committee Chairman Steve Stivers tried to calm his rattled caucus by saying he believed less than 10 additional Republicans will retire. Unfortunately for his committee, that would still likely make this the worst year of congressional retirements for a political party that we know of. 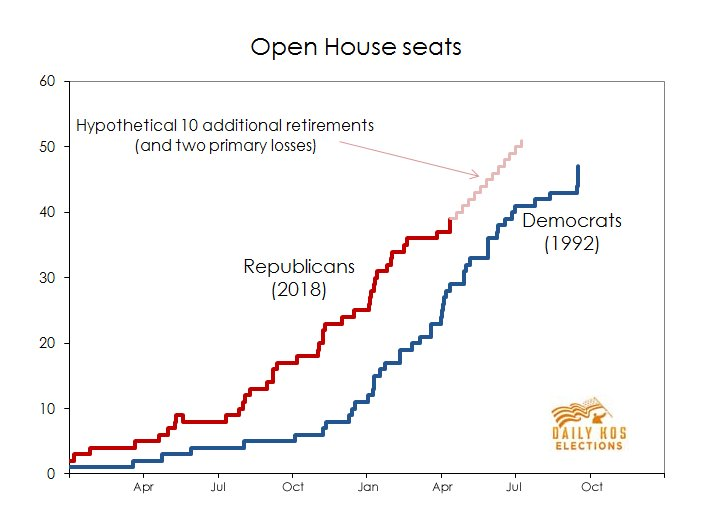 A number of theories have been suggested about why so many incumbents have retired. Two floated by the website FiveThirtyEight, that retirements were mostly endangered moderates or term limited committee chairs, certainly explain some of the early momentum of Republican retirements. However, since then, we have seen non-term limited committee chairs bow out, middle of the pack and even conservative Republicans throw in the towel, and even quite a few Republican backbenchers with safe seats -- like Ross -- decide they are done working in Congress.

In Ryan’s case, most political writers seem to think he is retiring due to a combination of ever-present conservative unrest, and the growing possibility that Republicans will lose the majority in the 2018 congressional elections. Republicans retiring due to the fear of a Democratic wave, is in some ways, a self-fulfilling prophecy. The loss of incumbency advantage over the last year has dramatically cut down the scale of wave needed for Democrats to take back the House.

However, there is some evidence that Ryan’s retirement may be a blessing in disguise for the GOP, Ryan is extremely unpopular nationally, and his retirement means one less unpopular politician for the Democrats to tie Republican congressmen and congressional candidates to. Yet most research on electoral blowback suggests that there is only really one elected official on people’s minds when they go to vote in the midterms, and that person does not seem likely to retire anytime soon.