Ranked choice voting (RCV) has been adopted by several cities in the Bay Area of California and elsewhere to replace a contingent runoff taking place after a November election. One of the major reasons municipalities have switched to RCV is that running one election is much cheaper for both taxpayers and candidates than running two. RCV is a cost effective way to more closely reflect the majority will than plurality voting.

One concern for RCV advocates and critics alike is ballot exhaustion. In RCV, ballot exhaustion occurs when all the candidates a voter ranked have lost even though two or more other candidates remain in the race. This might happen because a voter chose not to rank all or many candidates or because a voter ranked as many candidates as allowed on the ballot paper (in the Bay Area this is three candidates). Since such a vote contains no rankings of a candidate still in the race, it is allowed to exhaust and is no longer included in the tally for winner.

Because “exhausted votes” is a new concept, some wonder if exhausted ballots affect who wins and loses in close races. If, for example, ten percent of ballots are exhausted, and the election margin was less than five percent, the winner may have a majority of all the non-exhausted votes, but not a majority of total votes counted in the first round. This leaves open the possibility that some other candidate was the true majority choice -- and that, if voters who had their ballots exhaust were permitted to choose again, say in a runoff election among the two leading candidates, a different winner might  emerge with a clear majority of votes cast in the runoff.

Although this is theoretically possible, it is unlikely. But it also is grounded in assumptions about runoffs that overlook of how much more likely it is to have “exhausted voters” in a traditional runoff than “exhausted votes” in an instant runoff. Runoffs usually mean that fewer voters have a meaningful say in the decisive election.

Three of the four Bay Area cities that  now use RCV, Berkeley, San Francisco and San Leandro, used runoffs before adopting RCV. In those cities, there were 20 races between 1995 and 2007 in which a runoff was held. Of those 20 runoffs, turnout declined significantly in 16. Only for elections in odd years, where turnout is abysmally low, was turnout greater in the runoff than in the November general. Turnout in even year runoff elections decreased by as much as 47% -- reflecting that almost half of general election voters did not participate in the runoff.

The average decline in turnout was much greater in runoffs than the proportion of ballots that exhausted under RCV, which each city adopted between 2004 and 2010. On average, runoff elections saw a 23% decrease in voter turnout compared to a 12% average level of ballot exhaustion for RCV elections conducted in the Bay Area - -that is, there  were  nearly twice as many “exhausted voters” with runoffs  as “exhausted votes” under RCV. As the chart below shows, this means that more than 10% more voters in RCV general elections had their vote count in the final round compared to voters in general elections that went to runoff. Lower turnout and ballot exhaustion are qualitatively different, but in local elections that are already plagued by systemic low levels of participation, both are serious issues for the same reason: they undermine our confidence that the outcome of the election is the will of a majority of the electorate. Someone who cannot take time off work to vote in two elections is denied a voice in the decisive round in the same way as someone who has their vote exhaust before the final round after choosing several losing candidates. In some ways, this comparison is overly generous to runoff elections, as many exhausted votes are the result of deliberate undervoting (declining to use all available rankings) or bullet voting (ranking the same candidate several times). We will explore the nuances of undervoting and bullet voting in RCV elections in the Bay Area a forthcoming post..

The high levels of average voter turnout decline from the general election to a runoff in a runoff system creates serious issues that are avoided by almost any other system. Three in ten runoff elections conducted in the Bay Area between 1995 and 2007 saw candidates win election with less votes than their opponent received in the general election. These candidates won a “majority” of the votes of the runoff electorate despite the fact that more general election voters supported their opponent.This is a major threat to the legitimacy of elections that would be impossible under RCV, or indeed, most other systems.

Our research suggests that the Bay Area is not alone in experiencing these issues. Georgia holds up to four rounds of elections for Congress: partisan primaries, primary runoffs if no party candidates get a majority, a general election in November, then a post-November runoff if candidates do not win a majority of the vote. As detailed in our Federal Primary Election Runoffs and Voter Turnout Decline report, turnout declined an average of 30% in Georgia congressional primary runoffs between 1994 and 2016 (and an average of 36% across the 10 states that use primary runoffs). In 1992 and 2008, for example, the state held runoff elections for U.S. Senate seats -- the average decline in turnout was 44%. In the 1992 U.S. Senate runoff, Paul Coverdell unseated incumbent Senator Wyche Fowler in a runoff in which he received less than three-fifths as many votes as Fowler had in the general election.

Even states and municipalities that are not considering RCV have begun to move away from runoffs for these reasons. North Carolina recently decided to eliminate its primary runoffsfor 2016, citing the fact that more than half of primary voters did not participate in some recent runoffs as one reason for this change.

Furthermore, while there is little evidence on whether certain types of voters are more or less likely to have their ballots exhaust, there is a wealth of research on which demographics are less likely to turnout. Younger, poorer, less-educated, and minority voters, voters for whom the relative cost of time spent voting and time spent becoming informed enough to cast a vote are much higher, tend to disappear from the electorate in lower turnout elections.

This is not to suggest that exhausted votes are not a concern, but they are a more fixable concern. While about half of exhausted votes were due to voters not using their full rankings, the other half were largely due to the limits of the voting systems used in the Bay Area, which can currently only accept three rankings. As these systems are upgraded and voters become more comfortable with ranked choice voting, the number of exhausted ballot should go down on its own. Convincing cash-strapped municipalities and weary voters to participate in more elections, however, will always be a tough sell. 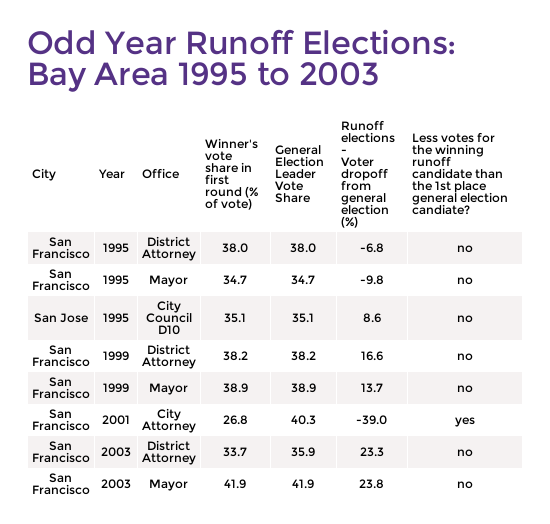 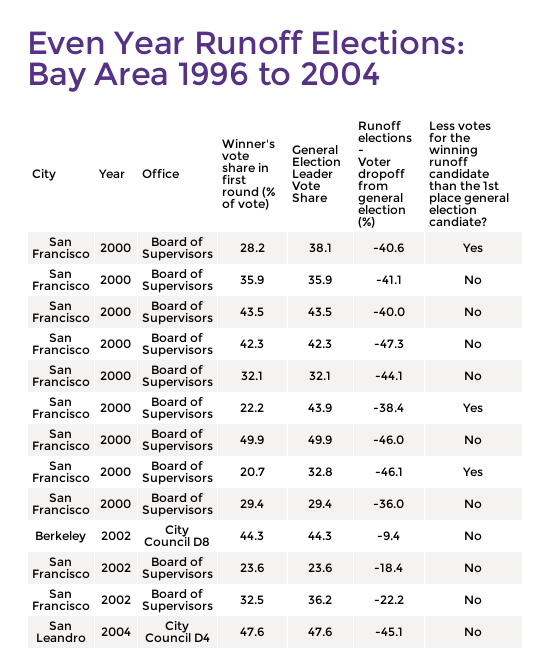