Of the 1,035 delegates who participated in choosing the Libertarian Party’s presidential nominee at the party’s national convention on May 23, 2020, 353 delegates participated in a ranked choice voting (RCV) poll through OpaVote that was reported on May 18. While only a third of delegates were represented in the poll, it still successfully anticipated that the party would nominate Jo Jorgensen as its nominee by a landslide final margin after a close first round vote among seven candidates. The shared outcome between the poll and the convention illustrates the value of RCV polling in general and suggests that party conventions that currently rely on multiple ballots could use RCV to save time and still produce the same outcome: a consensus nominee.

First, consider the poll results. Jorgensen and Hornberger are almost tied in the first round, but Jorgensen emerges with clear majority support with 60.5% in the final round. Now, we can see how the RCV poll anticipated the outcome of the actual Libertarian Party convention. Again, Jorgensen and Hornberger are the final two candidates, and Jorgensen emerges victorious by more than a 20% margin. 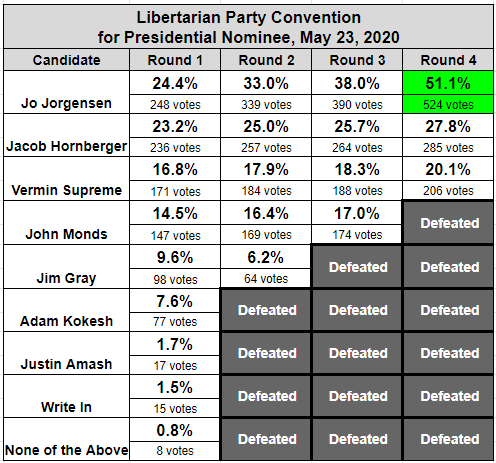 Multi-candidate party nomination contests are often fluid races whether they are decided by party delegates at a convention or voters in a primary. The May 18 poll of Libertarian delegates is another example of how RCV polls can provide a deeper understanding of a race and better anticipate the eventual outcome than traditional single-choice polling. This Libertarian example builds on FairVote’s Presidential Primary Polling Project, which used RCV polls to analyze the presidential primaries on the Republican side in 2016 and the Democratic side in 2020.

The poll of Libertarian delegates is also notable, because it illustrates how RCV can save time at party conventions. The Libertarian Party’s national virtual convention was a day-long affair and required delegates to submit four separate ballots. With RCV, delegates would have only needed to submit one ballot with their ranked preferences, allowing for a faster process that still chooses a nominee with majority support. No matter the party, RCV makes polling and voting in presidential primaries simpler and more representative.