Political commentators describe the potential for a ‘blue wave’ this November. But what is a wave, and can Democrats ride one to control of the U.S. House of Representatives in 2018?

The definition for a ‘wave year’ can vary. FairVote’s Monopoly Politics projections describe a wave year as anything over 53 percent national preference for a party, irrespective of how many actual seats are won. Using this definition, most models project a wave year for Democrats, with a growing number of seats up for grabs.

At first glance, the biggest differences between FairVote’s projections and the other models come from the numbers of seats called “safe” or “very safe” for Republicans, and those described as “tilting,” “likely” or “leaning” toward Republicans. The models share similar numbers for toss-up seats and those that are “safe” or “very safe,” and “leaning,” “likely” or “tilting” toward Democrats.

Some models also include fundraising, polling results, extrapolations from the results of polls in similar districts and input from election experts.

District partisanship and POAC are the only factors we calculate ahead of an election, based on vote shares from previous elections. What remains unknown until election day are the “incumbency bump” and national party preference. Notice that FairVote’s model does not include spending totals or expert opinions.

Our default setting for how much 2018 will favor incumbents is 3.3 percent: the final incumbency bump from 2016. FairVote’s model defaults to a 50-50 split in the national party preference between Democrats and Republicans in a given election year, but developing consensus is that 2018 will not be a 50-50 year.

Changing only the national party preference in the Monopoly Politics interactive spreadsheet to use either The Economist’s projection of a 54.3 percent national preference for Democrats this November (or FiveThirtyEight’s most conservative projected popular vote margin of 8.7, a different term for essentially the same number) our model projects the Democrats could gain a single seat majority in the House.

Regarding individual seats considered toss-ups this November, many models again form a consensus, with very few notable differences. However, there are some differences between the projections. For example, the FairVote model deems 19 seats toss-ups in a 50-50 year. Replace that with a 54.3 percent national preference for Democrats and the number falls to seven seats.

Other models also deem 20 seats toss-ups that FairVote’s default model calls safe—all for Republicans. Of those, only eight seats become toss-ups by FairVote’s projections under a 54.3 percent national preference for Democrats, and none are projected to switch parties.

Most notable, though, are the two seats every model but FairVote’s deem toss-ups, even with a 54.3 percent preference for Democrats: Minnesota’s first district, MN-1 and New York’s 22nd district, NY-22.

The different projections result from what data are considered. FairVote’s model sticks out for its simplicity. It uses only prior voting history and a hypothetical two-party preference without regard to any district-specific polling, campaign financing, scandals or other current events. Nevertheless, FairVote’s model has been remarkably accurate in the past, highlighting how predictable our winner-take-all House elections have become.

But what do all of these numbers mean for the elections this November?

There will likely be a handful of close-calls for incumbents. There may even be some surprises in districts with open seats. However, a blue wave would not necessarily translate into Democratic control of the House, let alone a proportional number of seats. The fact that, according to FairVote’s projections, Democrats need a national preference of 54.3 percent to gain even a single seat majority in the House shows that changes at the ballot box may not lead to changes in representation. 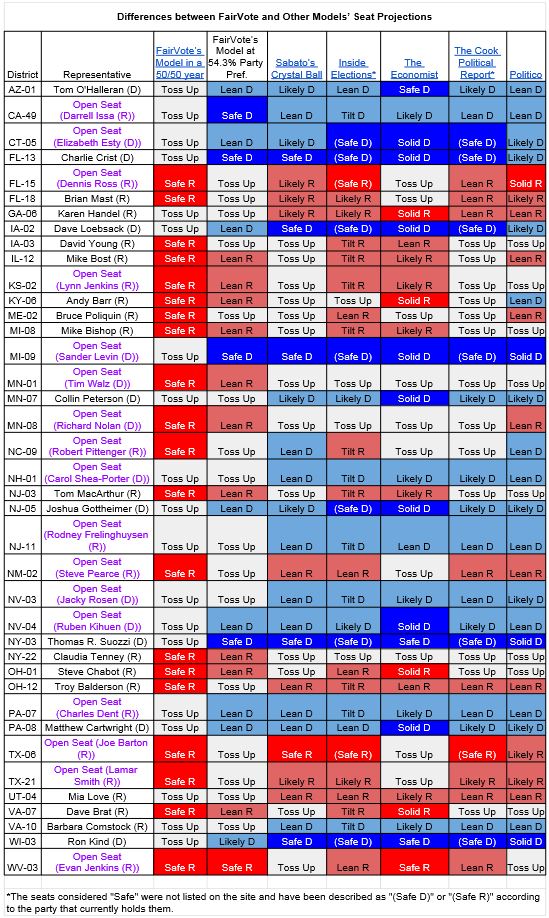