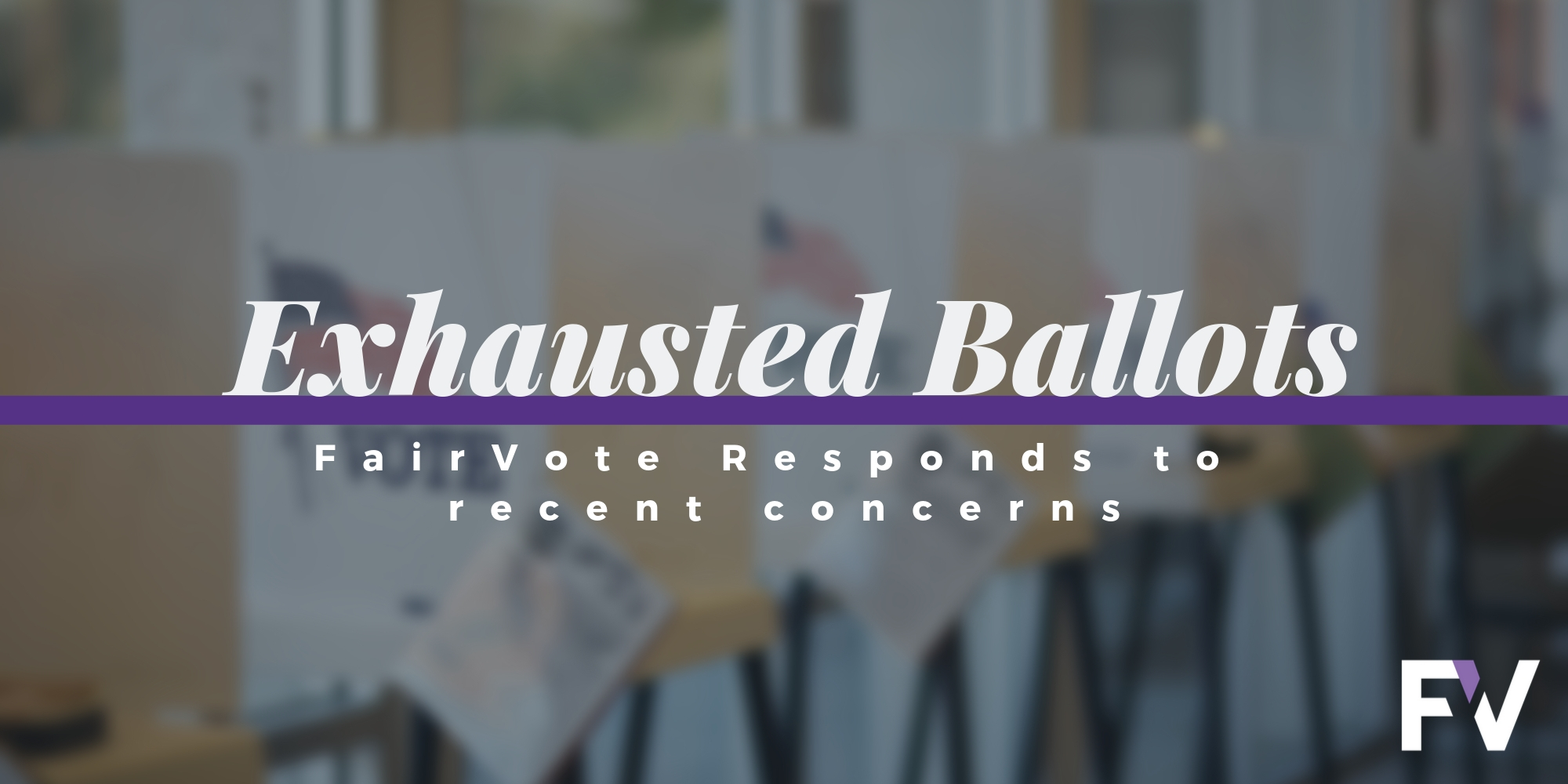 Ranked choice voting (RCV) passed a new test in 2018 - it was used for the first time in state primaries and federal general elections, including a closely contested bellwether congressional district, in Maine. Exit polls showed that 60% of Maine voters wanted to either keep or expand the system. Overwhelmingly, voters of all partisan stripes reported finding it easy. In 2019, RCV was even expanded to include Maine’s presidential elections.

Maine’s first use of RCV in 2018 included its second congressional district election, a district that twice voted for Obama and then voted heavily for Trump in 2016, making it an important race to watch. The contest was close. Neither Republican incumbent Bruce Poliquin nor his Democratic challenger Jared Golden had earned more than 46.3% in the first round - less than the percentage of the vote of every winning Member of Congress in 2018. Golden trailed by 0.75%, but won the instant runoff by 1.2% after securing a large majority of votes from supporters of the independent candidates. While the relatively poor results for an incumbent in the first round made the outcome unsurprising, it still triggered a partisan reaction.

This summer, the Maine Heritage Policy Center, a conservative policy think-tank, came out with a negative report, arguing that RCV had created a “false majority,” because Golden’s final round vote total was not a majority of the first round vote. This was shortly followed by an issue brief from the Heritage Foundation, a national organization that referred to the system as “a bad choice.”

Yet ranked choice voting is party-blind. Upholding majority rule does not systematically help either Democrats or Republicans. Maine citizens of all partisan persuasions had made calls for RCV in the state for over a decade, following gubernatorial elections in which the state’s highest executive office was elected with 35.4% in 1994 (Independent Angus King), 38.1% in 2006 (Democrat John Baldacci), and 37.6% in 2010 (Republican Paul LePage). In fact, nationally, Democrats won six races for US Senate and governor in 2018 with less than 50%, while Republicans only won one.

However, because Maine’s most recent plurality winner for governor was a Republican, the push for majority-winners with RCV came to be seen as an attack on the legitimacy of Paul LePage. As a result, a completely nonpartisan reform that gives voters - all voters - a stronger voice, has been unfairly characterized as partisan gamesmanship among some conservative political elites. House Minority Leader Kevin McCarthy even included RCV in his list of “schemes” that the Democrats used to regain the House in 2018. It’s not, and it’s in fact working just as projected in protecting majority rule while allowing for greater voter choice.

This context may help explain why both the Maine Heritage Policy Center and the Heritage Foundation pieces make the same fundamental mistake in criticizing RCV. They focus on inactive or “exhausted” ballots and wrongly conclude that this is a problem specific to RCV. Ballots become inactive when, after some candidates have been eliminated, they do not rank any of the remaining candidates. Because such voters abstained from ranking the other candidates, their ballots become inactive, rather than counting for a candidate they chose not to rank in a later round. They are no worse off than they would be in a single-choice plurality contest for doing so, but they do opt out of the benefit of having their vote count for a back-up choice.

What their analyses miss is that there is a plain apples-to-apples analogue to ballots becoming inactive both in single-choice plurality elections (which the Maine Heritage piece prefers) and in two-round runoff elections (which the Heritage Foundation piece prefers). When compared in an apples-to-apples way, we see that RCV greatly improves on both of these methods.

In a single-choice plurality contest, the parallel to inactive ballots are “wasted votes,” those cast for a candidate with no shot at winning. Consider a worst-case scenario for inactive ballots under RCV - every single voter only ranks one candidate. When a candidate is eliminated, every single ballot ranking that candidate becomes inactive. Such a thing would be unthinkable under RCV, yet this worst-case scenario is exactly what happens in every single-choice plurality contest.

For instance, in Maine’s Democratic primary election governor, where an RCV tally reduced a field of seven candidates to two, about 7% of ballots became inactive during the count (about one out of 14 voters). But if only first choices had been used, 38.4% of ballots would have been “wasted,” having been cast for candidates placing third or later with no back-up opportunity provided.

With RCV, those voters have the option to rank back-up choices to ensure that their votes will not be wasted. If even a small number of voters do so, that is a marked improvement. In the case of the Democratic primary, it was a lot of voters. Nearly nine in 10 Democratic voters ranked more than one candidates, and more than one in three ranked at least six candidates. In the end, RCV allowed more than 80% of those potentially “wasted” votes to count in the decisive choice between the two strongest candidates. The winning candidate, now-governor Janet Mills, went from leading with 33% of the first round vote to a convincing 54-46% win in the instant runoff.

This demonstrates that the Maine Heritage report has it exactly backwards when it says, “It is clear that plurality elections do not elicit as many exhausted ballots.” In fact, plurality elections waste far more votes than RCV elections. We know, for instance, that more ballots become inactive when a jurisdiction limits the number of rankings to only three, as many early adopters of RCV did due to the limitations of older voting equipment. Plainly, this problem is much worse if voters are limited to ranking only one, as they are in single-choice plurality elections.

In two-round runoff elections, the parallel to inactive ballots is the drop in voter turnout we see between rounds of voting. As we have catalogued repeatedly, that drop in turnout can be very severe. In many cases, the winning candidate in the runoff has even fewer votes than they had in the first round, something that would be impossible under RCV.

This demonstrates that the Heritage Foundation report also has it backwards when it says “Runoff elections guarantee that the winner of the runoff election has a genuine mandate from a majority of the voters - a crucial factor in a democratic systems.” A clever wordsmith may assert that they have a sort of majority - a majority of those who happened to be able and willing to vote in a second election weeks after Election Day - but it cannot be called a mandate if it is possible for even fewer voters to approve of the winner in the runoff election than did in the first round.

In fact, dodging whether RCV is good for voters and for our democracy in favor of semantics over what technically constitutes a “majority” is a pattern in these critiques. Because some voters abstain from ranking every candidate, close elections with RCV do result in a winner with fewer than half the number of votes that were cast in the first round. However, this obscures the point that RCV consistently promotes the election of candidates with more support and a broader mandate than either single-choice plurality or two-round runoff elections. Surely the definition of the word “majority” matters less than electing a winner who can genuinely demonstrate that their holding of the office derives from the consent of the governed.

These principles - the consent of the governed, identified in a single, efficient election - are wholly consistent with conservative ideals. Perhaps that is why at the state and local level, efforts for RCV remain bipartisan. Republican legislators have championed these ideas in states like Georgia, Missouri, Montana, Rhode Island, and Wyoming, all of which had bills for RCV introduced by and principally co-sponsored by Republicans in their most recent sessions. It’s why states like Alabama and Mississippi in recent years acted to join Arkansas, Louisiana and South Carolina in strengthening voting rights for overseas military voters by providing them with ranked ballots when they hold congressional primary or general election runoffs. It’s why the Utah Republican Party had a history of using RCV in their internal elections, a right they extended to local elections in 2018, and which two towns (Payson and Vineyard) will use for the first time this coming November.