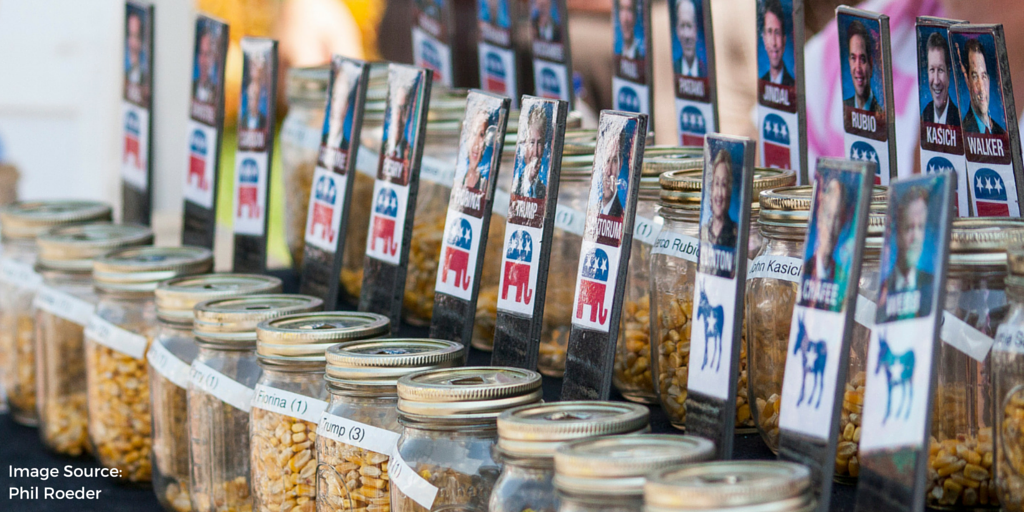 Zoom In: Results in Iowa

On Monday, Iowans voted and the rest of the nation waited with bated breath. The Iowa caucuses, as the nation’s earliest contests, are regarded as the viability barometer to measure a candidate’s ability to secure their party’s nomination. By the night’s end, Martin O’Malley and Mike Huckabee suspended their campaigns. A day later, Rand Paul also withdrew from the race. Some candidates beat expectations, while others underperformed in comparison to polling data.

Ted Cruz earned the most Republican delegates (8) with 28% of the vote, an outcome that defied many pollsters' predictions. FairVote’s latest simulation of a ranked choice voting primary hinted at this outcome, revealing Ted Cruz as the candidate with the broadest support among Iowa Republicans in a head-to-head race.  Also winning delegates were Trump (7), Rubio (7), Carson (3), Paul (1), and Bush (1). The remaining six Republican candidates failed to secure enough votes to receive a delegate. On the Democratic side, Hillary Clinton and Bernie Sanders split the delegates receiving 23 and 21, respectively. Sanders and Clinton finished within a single percentage point of each other, and while we will never know the exact number of votes that separated them, it is clear that neither candidate earned a commanding lead.

In the larger political context, the Iowa Caucus revealed a significant gap between hypothetical polling and voting realities. When RealClear Politics averaged the results of numerous polls, including Gravis, PPP, and Quinnipiac, the results showed Clinton winning by 4.0 points and Trump winning by 4.7 points. Obviously, they were wrong.

From PPP’s unique habit of fully reporting second-choice polling, FairVote can clearly observe the value lost to many Republican primary voters by not having a second choice expressed in the race. In PPP’s latest poll of Republicans in Iowa, 40% of Christie supporters list Marco Rubio as their second choice. Rubio also earned 13% of second choices among Mike Huckabee supporters, and 9% from Rick Santorum supporters. These second choice preferences are particularly critical among voters who supported candidates that did not receive any delegates at all, including Chris Christie, Mike Huckabee, Rick Santorum and Jim Gilmore.  If these voters had the ability to cast a ranked choice ballot, their support could have provided Rubio with a critical edge over Trump.

Trump barely surpassed Rubio for second place by only 2,262 votes. Ben Carson and Jeb Bush, both of whom enjoyed strong second-choice support from voters of eliminated candidates, also stood to benefit from a ranked ballot. These voters did not have the opportunity to list a second choice preference or transfer their support to a more viable candidate, like their Democratic counterparts. Therefore, their votes were effectively wasted and they had no say in the eventual distribution of delegates.

Focus: No winner in Iowa

The urge to crown a single candidate as the winner for the Iowa Caucus is misguided. Despite the fervent spinning of campaign operatives and bold headlines of media outlets, Iowa’s political system does not declare a winner. The proportional allocation of delegates that results from the caucuses is extremely different from winner-take-all, as explained in our last blog post. Furthermore, the Iowa delegate count for the Republican and Democratic parties represents roughly 1% of the total number of delegates at their respective national conventions. However, the parties have different rules that govern how Iowa delegates will vote.

There are two major types of delegates: bound and unbound. The Republican Party of Iowa, for the first time, has bound delegates, which means they must vote at the national conference for the candidate that won them on the first ballot. Democratic delegates in Iowa are unbound. Throughout the multi-layer process of delegate selection from precinct to county to district to state levels, delegates are free to align with any viable presidential candidate of their choosing regardless of caucus results. U.S. history has repeatedly shown that the state delegate count on caucus night tends to differ from the allocation of delegates a few months later at the national convention.

What’s next for presidential candidates? New Hampshire: A different kind of primary.