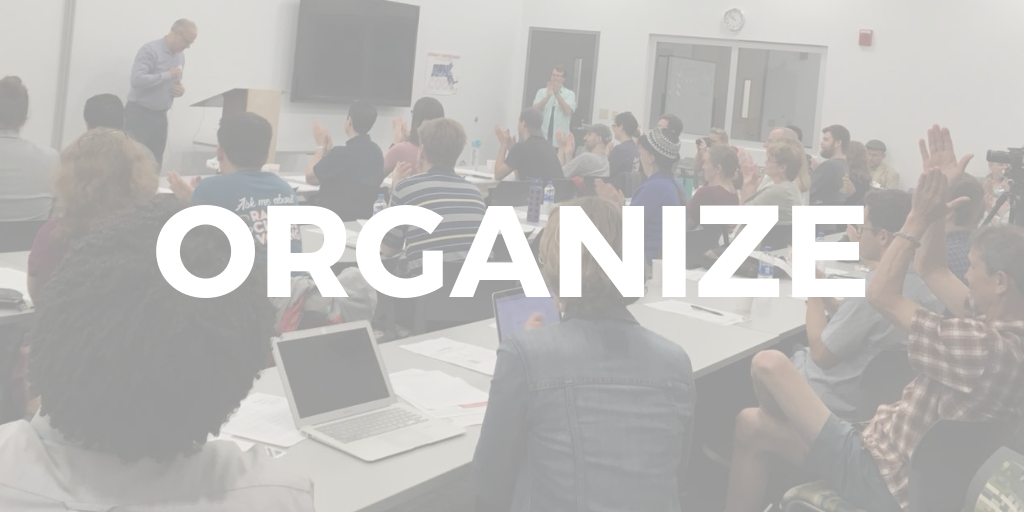 Developing a core group of supporters in your area and determining what is an achievable goal to bring RCV to your elections is a critical first step. As you grow your supporter base, assigning roles to stand-out volunteers (including in-person volunteer recruitment; social media engagement; fundraising; and communication with the media, public officials, and civic groups) will be instrumental in ensuring every task that needs to be accomplished has someone who is responsible for completing it.

After your group has determined its objectives and your campaign has begun, there are a number of other best practices you'll want to employ to ensure success.

There are a number of different roles that volunteers can help with on your campaign. Some, like signature gathering, don't generally require a great deal of training and can be done by many people; others are more specialized and require identifying the right person for the job. One of the best ways to figure out which roles should be filled by which volunteers is by having one-on-one (1:1) conversations with prospective volunteers. The structure of a successful 1:1 is as follows:

1. Introductions and Your Personal Stories

Getting started with an icebreaker to make sure both you and this new volunteer are comfortable is always a good idea. Then, telling one another your personal stories can be useful not only in getting to know one another but also as a way to convey to others why you're passionate about bringing ranked choice voting to your elections. It is useful for your personal story to follow the structure of "challenge, choice, action, outcome". As the name implies, this means starting by identifying a challenge in your own life. This should tie into the reason why you're involved with this campaign. After speaking to the challenge, you come to the choice: you chose to get involved in this campaign to fix the unfair electoral system we have. Then, what action have you taken as a result of that choice. And finally, how will that choice and ensuing action lead to the outcome you're working toward? Internalizing this structure will help make an inherently abstract idea (i.e., our archaic electoral system and how we can fix it) more relatable in how it can affect people in their real lives.

After you share your personal story, you should attempt to guide them through telling theirs. In addition to the conversation surround their personal story, this should help to give you a sense of how much organizing or political experience they have, what other skills they bring to the table, and what roles you still have to fill which suit their strengths. Positively identifying a volunteer's strengths will be important later in the conversation.

3. Create a sense of urgency

The all-encompassing nature of our electoral system means that so many other things which are important to people are highly dependent on the constraints imposed by the current unrepresentative system. "We will not be able to (fill in the blank -- relating it back to the personal story that they've just shared on why they decided to meet with you) without solving this pressing problem. We've been stuck with this outdated system for too long. If we're ever going to make progress on all the other issues we care about, we need to switch to RCV now." And, it's important to remember, even if you disagree about what those "other issues" are, you are on the same team when it comes to reforming our broken electoral system.

4. Make a hard ask and agree on next steps

Now, you are both on the same page about the urgency of the need for reform, and you have a good sense of where you're both coming from. The next step is making a "hard ask" to convince them to commit to joining your campaign. Having already identified the future volunteer's strengths earlier in the conversation, you can now honestly tell them, "You are the perfect person for (this role) because [...] Can we count on you to join us?" Hard asks are direct and specific. You should always have a second and third ask ready in case they feel uncomfortable with your first ask, and you should not be afraid to ask for more than you think they are willing to give. However, it is important to recognize that even if you think they are perfect for a specific role, sometimes working up to that additional responsibility will be necessary, and the most important thing is for them to walk away committed to at least some specific action. That can be built on going forward. If done successfully and they agree to join your campaign, you should then discuss what the next steps are for them to get involved, whether attending an upcoming organizing meeting or any other task that they can do in their new role.

The final part of the 1:1 comes after it's over. Following back up to thank them for meeting and to confirm the action items that were agreed upon within a day of your 1:1 ensures continued engagement and that the commitments they made will be followed through on. A great 1:1 can be squandered if not successfully followed up on.

Different campaigns may or may not require phonebanking or canvassing, depending on what you're trying to accomplish and how much of that strategy involves grassroots support. However, should you recognize the need for phonebanking and canvassing, there are a number of best practices to keep in mind.

Internalizing the messaging is key to effectively conveying what you're trying to accomplish to folks who are unaware of the problem you're solving or who are on the fence about whether they agree with your solution. This is often facilitated with a script, which should be practiced with and/or between volunteers to ensure comfort before beginning. More tips on training volunteers are available in the Educate section of the Toolkit. The script should include an introduction of the volunteer as such, for what campaign you're working on, and asking for the specific individual you are targeting in your calling or canvassing.

It is important to recognize that different stages of the campaign call for different types of questions when you are phonebanking and canvassing. Essentially, these can be broken into three phases: ID, persuasion, and GOTV.

ID calls and canvasses are designed to gather data about the current views of specific voters, so that you can begin identifying who your allies are, who your opponents are, and who you should focus on persuading. Identified supporters also become your primary pool of prospective volunteers, and you can save yourself time and energy on outreach to "lost cause" opponents. ID canvassing and phonebanking is crucial, but you should advise volunteers to avoid debating the merits of RCV at this stage, since there is no way to record that information and it detracts from the main goal at this stage of identifying existing support.

After you've developed your "universe" throughout the ID phase, persuasion is the next step. This will require much more extensive knowledge of the arguments for and against the current voting system, as well as ranked choice voting in general. In addition to the script, which should still begin with ID questions before transitioning to new follow-up questions for those leaning but not firm in either direction or still unsure, providing a separate sheet of common talking points is useful at this stage, as it can help volunteers to bolster the case for RCV as they get questions they may be less familiar with.

C. Get Out The Vote

GOTV stands for Get Out The Vote, and it is the crucial final stage in a campaign, especially one in which voters will decide whether or not to adopt RCV by initiative or by approving changes to a charter or constitution. Get Out The Vote conversations should not engage with the issues at all, but instead focus solely on walking known supporters through their vote plan: where they will be going to the polls, how they plan on getting there, where they'll be coming from, who they'll be going with, and what their back-up plan is. Within about two weeks of an election, persuasion is no longer very effective, but having these conversations with supporters can significantly impact turnout, which could be the difference in whether or not your campaign is successful.

While volunteers should almost universally be steered toward engaging in phonebanking and canvassing if they are able to, it is crucially important that throughout each stage of the campaign you are able to track the data gathered from all of this outreach. That will help you to effectively build your persuasion and GOTV universes and identify your potential volunteers.

There are a number of other best practices that you can employ while phonebanking and canvassing, and we would be happy to answer questions that you have when this stage of your campaign is underway.

As important as it is for the grassroots to be organized and effective in your campaign, it is often equally important to engage with the "grasstops", the community and civic leaders who can bring their whole organizations and networks on board your campaign.

For campaigns to bring ranked choice voting to your elections, identifying local chapters of groups we've worked with around the country is often a good first step. These groups include the League of Women Voters, Represent Us, Common Cause, and others. Developing a diverse coalition that represents as many groups as possible within the community is necessary to demonstrate that your support is as diverse as the community you're looking to bring RCV to. Non-dominant political parties are often interested in collaborating on electoral reform because they understand firsthand the unrepresentative nature of the first-past-the-post single-winner system so much of the country uses. However, gaining support from local elected officials from either of the two major parties can also be instrumental in generating support more broadly in the community, and each group will have their own reasons for getting involved. Broad coalitions within a party can benefit from RCV by ensuring votes aren't split in crowded primaries. On the other hand, independent candidates can be buoyed through RCV by allowing voters to vote their true preferences without fear of helping their least favored candidate by voting for a "spoiler".

Because RCV appeals to such a broad array of groups and interests, it is especially important to target your message to the group that you're speaking to. To this end, check out the Resources section of the Toolkit for messaging targeted to a number of these different groups.

FairVote has provided our state affiliates and partner organizations with spreadsheet templates of groups that are often valuable to reach out to, and we would be happy to equip new chapters with the same. Local organizations and groups should be added to customize for your specific area as well.