Watching the results come in on the night of February 5th in your living room, you may have noticed that not everything added up to 100% (double entendre intended.)

Now, what is Edwards doing in there? Didn't he suspend his campaign? Are thousands of voters running some massive write-in campaign to force Johnny back on the ballot?

For those Edwards supporters out there, sorry, the answer is 'no.' That 10% is largely attributed to the millions of Americans that voted absentee, long before the polls opened and when John Edwards was still a viable candidate in the race. Daily Kos and The Moderate Voice were quick to point out that these absentee ballots cast for Edwards are, for the large part, not going to count.

Crunching the numbers, on Super Tuesday alone, 414,570 Americans lost their vote. These individuals (a population nearly the size of Wyoming) will have no say in who the Democratic nominee is in 2008. This seems to most unfair and to many an unintended and unpreventable feature of the primary process. We are left wondering who those 400,000 Americans would have voted for if they had known Edwards would have suspended his race. Moreover, we are left wondering if these 'lost votes' would have made a meaningful difference in the outcome of the race. Take New Mexico:

If, as many pundits believe, Edwards voters prefer Obama over Clinton, those lost votes may very well have made all of the difference in primaries across the country. For good measure (and without any political insight), if we assume Richardson voters go over to the Obama camp, allowing voters to recast their ballots may very well have meant a substantial lead for Senator Obama (or Clinton, for that matter.) In Ocean County, NJ this actually was the case, where a judge ruled on January 31st that voters who cast absentee ballots for candidates who have since withdrawn from the 2008 presidential race could get replacement absentee ballots before Tuesday's NJ primary. But Ocean County is a single example and simply not a sustainable model for election reform.

The Answer is Instant Runoff Voting

Although FairVote advocates for instant runoff voting for all executive elections, the need for a ranked choice ballot cannot be clearer than in the case of absentee voting. Let's say that you are an elderly Oklahoma resident who simply cannot make it to the polls on February 5th. You write your Board of Elections and receive your absentee ballot. Now, imagine that instead of selecting one candidate (like those 2,000 absentee voters for Edwards), you are allowed to rank your choice based on preference (San Francisco actually uses the model -- you can see a sample of the ballot HERE.) Here is what your ballot may look like: 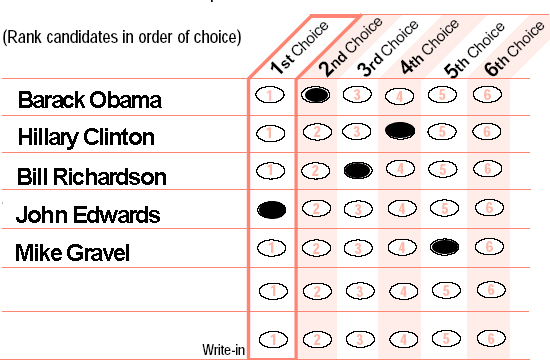 You select John Edwards as your first candidate, and continue to rank downwards based on preference (if Edwards doesn't win, then I want Obama, for example.) The benefit of an instant runoff ballot is clear. Those 400,000 voters would still have a voice -- their second (or third, or fourth, etc.) choice would count. It's time we get those votes back. See what you can do at www.fairvote.org/irv