On February 21st, the Democratic National Committee's (DNC) Executive Committee unanimously passed a resolution calling for an explicit, individual right to vote in the U.S. Constitution. Donna Brazile, DNC Vice Chairwoman, submitted the resolution. The unanimous vote that followed marked another big step forward as support for a right to vote amendment continues to gain momentum in local and national discussions around voting rights.
Many, however, were shocked to find out that we do not in fact have a right to vote in our Constitutional already. This was evident on Twitter over the weekend: 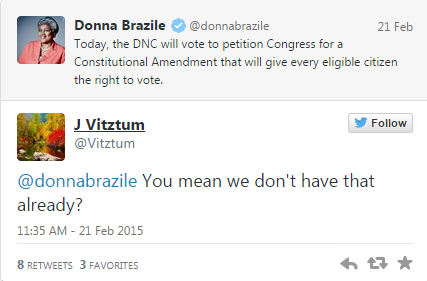 To address the collective chorus of "Wait. What?" from this weekend, the answer is no. Contrary to popular belief, Americans do not have a constitutional right to vote. The US is one of just 11 democratic nations in the world without a right to vote in their constitution. While various constitutional amendments prevent against discrimination at the polls based on age, sex, and race, there is no affirmative right to vote to protect Americans at the polls. The fact that we needed those amendments in the first place, and even further legislation in the 1960s to prevent discriminatory practices like poll taxes, highlights the fact that we don't have an explicit right to vote granted in our Constitution.

While it is true that a majority of states have a right to vote enumerated in their state constitution, these state-level protections have proven weak without clear federal protections to back them up. State courts often cite federal precedent set by the U.S. Supreme Court under the federal Equal Protection Clause, and only evaluate whether laws are written to be administered equally. When this happens, laws that are applied "equally" to all citizens, but still infringe on individual voting rights, are allowed by our courts. This merging of state constitutions and the U.S. Constitution in a court's decision-making process is known as "lockstepping," and is a product of the absence of an explicit right to vote at the federal level.

This federal constitutional omission is no small oversight. Wisconsin's Supreme Court demonstrated lockstepping in a decision leading up to the 2014 midterm elections. Additionally, several other key court decisions prior to the midterms highlighted the fact that Americans are vulnerable to restrictive laws that keep eligible voters from the polls. Without action, voting laws and political interests will continue to pose a threat as democracy is taken from the people and put in the hand of politicians.

A right to vote amendment would provide the ultimate protection for voters. It would empower Congress to enact minimum electoral standards to guarantee the highest degree of inclusivity, and consistency across the nation. It would also give our courts the authority to keep politicians in check when they try to game the vote for partisan reasons. See FairVote's legal analysis on the impact that an explicit, individual right to vote would have here.
To learn more about the movement to establish a constitutional right to vote, visit RightToVoteAmendment.com. You can also check out FairVote's Promote Our Vote project and build support by passing a "Right to Vote" resolution in your community.
Right to vote amendment Right to vote Quick news