RealClearPolitics's Sean Trende and Vox's Dylan Matthews have been trading blows about the significance of some numerical musings on Senate popular vote totals published here last month, with Matthews arguing that those numbers point to the Senate's being fundamentally undemocratic and Trende accusing him of misusing the data (see Matthews's initial piece, Trende's takedown, Matthews's rebuttal, Trende's latest counter). In a brief follow-up I noted that the discrepancy between the parties' nationwide popular vote and their share of seats in the Senate doesn't necessarily point to an easy takedown of the Senate as anti-democratic. But what about the House?

First, a quick note on one of Trende's major critiques of Matthews, which is Matthews's reliance on the fact that currently sitting Senate Democrats received about 20 million more total votes than currently sitting Republicans in winning their seats. That number is not to be confused with the split in the number of votes cast for all Democratic and Republican candidates (including losing candidates) in the 100 elections that decided the makeup of the chamber. The "victors' total" figure is interesting to document as a kind of cute factoid: for example, it seems to be the case that, out of the people who can say that their sitting Senator is one they voted for, many more voted for a Democrat than for a Republican despite Republicans' substantial majority in the chamber. But Trende and Philip Bump are correct to point out that it doesn't indicate much about "fairness" or proportionality (and wasn't intended to in my original piece). Instead, it's the parties' vote share across all elections that meaningfully hints at which party the country as a whole preferred when it elected the current Senate, which is really Matthews's core justification for calling the Senate anti-democratic. Democratic Senate candidates outperformed Republican candidates by about 2.5 percentage points, but that translated into an eight-seat advantage for the GOP.

There's plenty of room for debate about what that means for the Senate. But let's talk about vote shares in the House. According to the Cook Political Report, Republican candidates in 2014 won 51.4% of the national House vote to Democratic candidates' 45.7%, with 2.88% of votes cast for other candidates. But Republicans came away with 247 seats, or 56.8% of the chamber. What should we make of that?
Trende makes some sound points about the limitations of vote share as a measuring tool: given that the House and Senate are elected in local first-past-the-post races, he asks, how much does the aggregate vote share in those races really tell us about national sentiment? Trende argues that it's improper to compare national popular vote share to House or Senate seats won, because "the parties aren't trying to win national elections," citing differences in ideology, candidates' personal attributes, and campaign quality across races. On ideology, he may be overstating his point: as Matthews points out, since the two parties in Congress increasingly vote in lockstep on key issues, there's arguably a sense in which a vote for a conservative or liberal Democrat isn't actually worlds apart from one for a generic Democrat. However, Trende is correct to note the counting issues posed by turnout variations, retirements, uncontested races, and third-party candidates, which combine to make raw popular vote share an incomplete proxy metric for the ideological mood of the nation.

But it's a mistake to lump the House and Senate too closely together here. Because races for all House seats are held simultaneously, differences in nationwide turnout between election years don't come into play--one of Trende's primary reasons for dismissing Senate vote totals. And turnout variations between House districts are much smaller than those between states, because districts vary much less than states in population. The nation's largest House district, Montana at-large, is less than twice as populous as the smallest district, Rhode Island's 1st; California's population is about sixty-six times that of last-place Wyoming (this according to the 2010 Census). So when it comes to the House, a big split between seats and votes really should make us sit up and take notice.

Besides, the limits of vote share don't make it a meaningless number. After all, we do have a national election for reference here. Thanks to the Electoral College, the presidential election isn't exactly a 50-state race, but it's not too far off from a national referendum on the parties--and the fact that swing states and swing districts don't always coincide helps smooth out variations in turnout (for example, almost none of Ohio's House districts are in play, but the state is ground zero for presidential campaigns). Take a look at how closely the two parties' vote shares in House elections have mirrored presidential races since 2000: 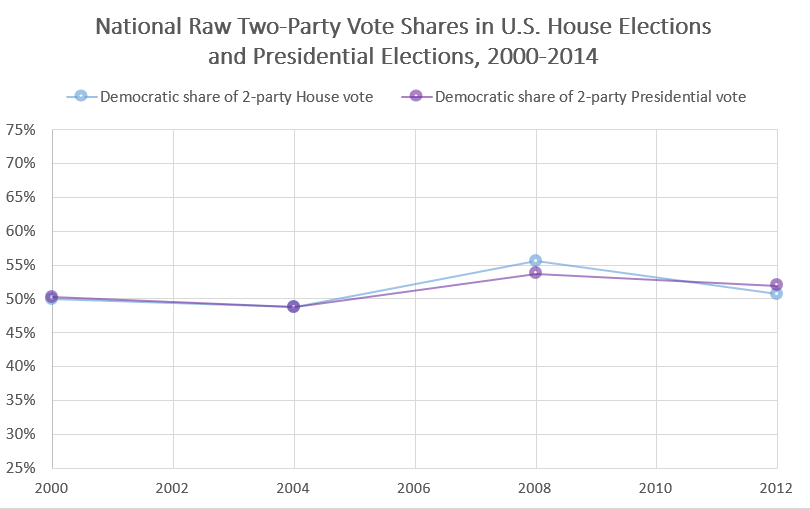 Sources: FEC, Cook Political Report
It's a pretty close fit. The biggest gap, in 2008, was just 1.9%, the equivalent of about 8 House seats under a hypothetical PR system. So no, raw vote share isn't going to equate perfectly with a nationwide PR election, but it's also not so hopelessly skewed by local variation that it can't tell us anything.
As well, there's a way to reduce the impact of the counting issues Trende cites. Instead of looking at the raw number of votes cast in each district, we can compare each district's two-party House vote share to that district's Partisan Voting Index (PVI), which is in turn determined by comparing a district's two-party vote share in the most recent presidential election to the nationwide presidential two-party vote share that year. This method lets us compare how heavily districts favored Republicans or Democrats in a given election relative to a uniform baseline, reducing the impact of differences in raw vote totals. Looking across the the 2014 House elections using this method (eliminating races without a candidate from both major parties), FairVote's Monopoly Politics 2016 projections model finds voters preferred Republicans to Democrats by 51.9% to 48.1%. That's actually a notch closer than the raw two-party vote margin of 52.9% to 47.1%; if the makeup of the House reflected the underlying national two-party preference, the GOP would hold just 226 seats, not 247.

It's still the case that summing vote totals across a series of first-past-the-post races will never fully describe what a hypothetical vote under a true national PR election would look like. But it's also quite clear that there's a genuine mismatch between how the nation votes for Congress and how Congress ends up looking.

Again, this kind of seats-to-votes mismatch in the Senate isn't inherently problematic: the Senate isn't meant to translate votes into seats at the national level. But the House is a different story. Unlike the Senate, which reflects the interests of states as political units in their own right independent of population (and which was designed, quite openly, as a mechanism to maximize the political clout of smaller states), the House really is meant to serve as a direct reflection of popular will--an "exact portrait, in miniature, of the people at large," in John Adams's phrasing. This is reflected in the House's institutional design: as the "lower," popular house, its members are elected frequently and simultaneously, making it more responsive to short-term changes in public opinion than the sedate Senate and its staggered six-year terms--and, of course, the House uses a quasi-proportional system of apportionment based on population. It's a body designed to reflect the electorate.

So while seats-to-votes distortions in the intentionally non-proportional Senate are baked into the cake of American bicameralism, there's a strong argument that similar distortions in the supposedly representative House are problematic on principle--a result of some flaw in the method of connecting seats to votes, rather than of an intentional decision to sever that connection, as in the Senate.

What's keeping the makeup of the House from reflecting the nationwide popular vote? It's the fact that we elect the House "first past the post" style--by giving a single plurality winner all of the representation for each district. That's a feature so easy to take for granted that the distortions it creates are difficult to notice at first glance, but it's crucial. Single-winner districts crunch voters' preferences coarsely into a binary value, meaning a landslide victory has no more effect on Congress than a hair's-breadth squeaker. So a party that tends to win by smaller margins, but in more districts, reliably comes away with more House seats than its vote totals would translate to if the House accurately reflected the nationwide vote. Right now, thanks to demographic sorting, that's the Republican Party, which won less than half of the national two-party House vote in 2012 but came away with a robust majority in the chamber thanks to precisely this phenomenon. (See Nate Cohn's September New York Times piece for further exposition.)

To the extent that we'd like the House to reflect national popular sentiment, winner-take-all districts are a cripplingly poor means of electing the chamber, because of the way they arbitrarily waste votes in "packed" districts and eliminate meaningful competition nearly across the board. Much of Trende's analysis points to that conclusion: wide differences in turnout across districts and the large number of uncontested races, for example, are in part a reflection of the fact that so few districts are meaningfully competitive. (See FairVote's Monopoly Politics material for a fuller unpacking of the woes of winner-take-all districts - and how a simple act of Congress could fix them)

It's true that raw vote shares can't tell us everything, and it's not an automatic trump to point out that Congress doesn't perfectly reflect the national vote, especially in the Senate. But no matter how you slice the numbers, it's abundantly clear that right now, the House of Representatives isn't, well, representative--and that's a problem.
Proportional representation Monopoly politics Fair representation