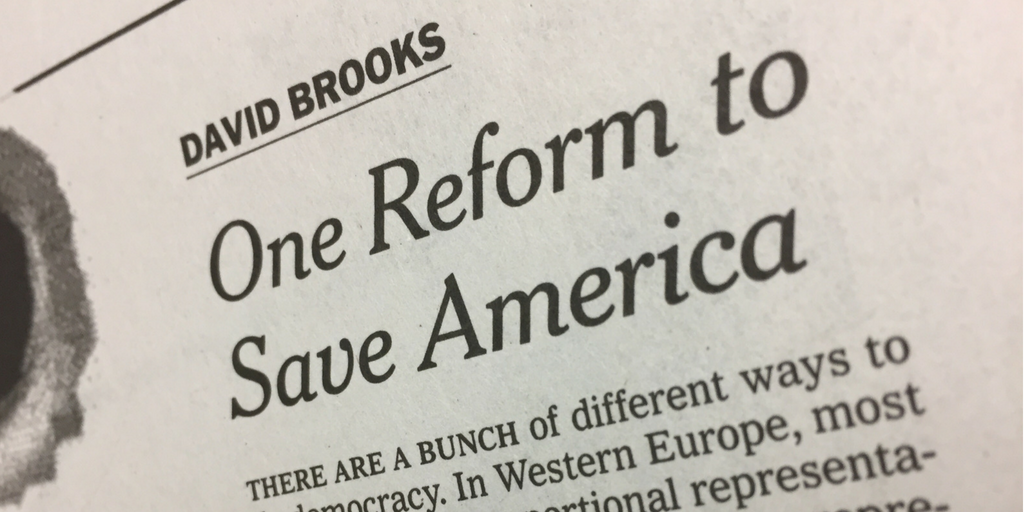 In Brooks’ provocative column, the conservative writer declares the two-party system as “ossified,” and argues that it has pushed American politics toward the extremes. The result, writes Brooks: “More and more people feel politically homeless, alienated from both parties and without any say in how the country is run.”

How do we fix this? Brooks backs FairVote’s Fair Representation Act, which was introduced before Congress in 2017 by U.S. Reps. Don Beyer, Ro Khanna, Jim Cooper and Jamie Raskin. It would transform the U.S. House by moving Congress from winner-takes-all single-member districts to something new: Larger, multi-winner districts elected with ranked choice voting.

If we did, Brooks argues, “Every district becomes a swing district, each vote much more important. Congress begins to work differently because with multiple parties you no longer have stagnant trench warfare — you have shifting coalition-building.”

This prominent column is the just another sign of the momentum toward ranked choice voting nationwide among those hoping to fix our polarized, dysfunctional politics.

On June 12, Maine will become the first state in the modern era to use ranked choice voting for all federal and state primary elections, including in crowded primaries for governor in both major parties.

San Francisco, one of more than a dozen cities that have adopted RCV to elect city officials, will choose its mayor in a special election next week using this system. It will be the first use of RCV in an open seat mayoral race in the city, and RCV will play a major role in the outcome.