2014's midterms saw a continuation of a trend in declining advantages to incumbents in the U.S. House, a likely indication of the increasing dominance of party affiliation over candidate-specific traits as the key driver of votes in federal elections.
Incumbents enjoy inherent electoral advantages over challengers, such as greater campaign spending ability, more press coverage, more experienced campaign operations, and ongoing delivery of constituent services for their district. FairVote's Monopoly Politics U.S. House projection model quantifies the advantages of incumbency by comparing the electoral performance of incumbents to their districts' underlying partisan lean. This "incumbency bump" roughly measures the degree to which incumbents would outperform hypothetical generic candidates of the same party running in their district. By this metric, the advantages of incumbency are in rapid decline. In the 2000 election, the nationwide incumbency bump was almost 8%; by last Tuesday, however, the incumbency bump had plummeted to just 2.55%. Take a look at the dramatic fall in the electoral benefits to incumbency in the House over the past decade: 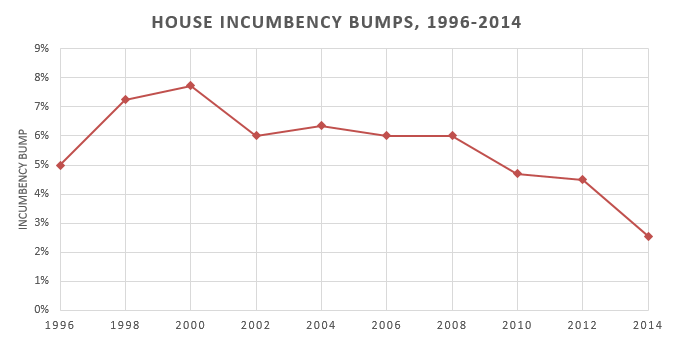 Democrats bore the brunt of Tuesday's relatively weak pro-incumbency sentiment: while Republican incumbents enjoyed a boost of 4.64%, the bump for Democrats was just 0.46%. Here's a look at the split between the parties' incumbency bumps since 1996:

This decline in incumbency's advantages likely reflects an increasingly efficient sorting of House representation by party: with districts increasingly likely to elect a representative of the same party as the overall partisan affiliation of their voters, cross-party incumbents are becoming increasingly unable to compete.
Stay tuned for more on FairVote's Monopoly Politics 2016 analyses and their implications for American elections.
Elections Monopoly politics Quick news