While we're on the subject of seats and votes in the U.S. Congress, let's look a little more closely at the increasing divergence between the national House vote and the makeup of the chamber.

Yesterday we discussed the limitations of using raw vote shares--that is, a comparison of the total votes cast for each parties' candidates across all districts--to measure national partisan sentiment. FairVote's Monopoly Politics House elections model attempts to capture that national sentiment more accurately. The model's "national two-party preference" metric measures the degree to which Democratic and Republican incumbents outperformed their respective districts' underlying partisan lean, which in turn is measured by how that district voted for president relative to the nationwide split in the presidential vote. By ignoring open seats and uncontested races and comparing vote margins to a uniformly defined baseline rather than summing raw votes, national two-party preference reduces the impact of the turnout disparities that make raw vote share a flawed measure. (See a fuller unpacking of this metric here.) Here's how national two-party preference has stacked up actual House results since 1996: 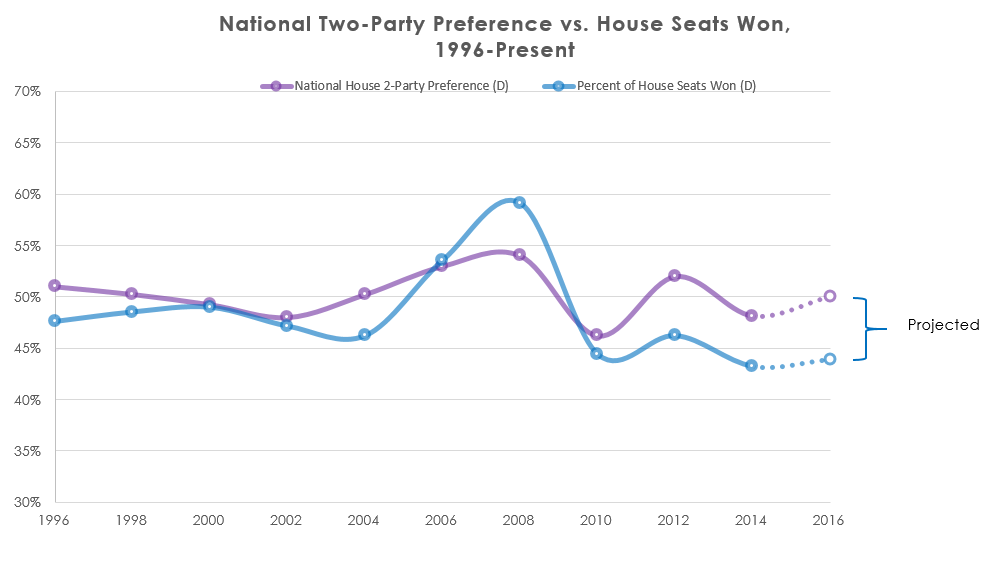 Sources: FEC, Cook Political Report, Monopoly Politics 2016
The projected values for 2016, drawn from our Monopoly Politics 2016 projections model, assume an evenly split national two-party preference of 50%. (The model allows users to simulate different House outcomes based on different values for national two-party preference in 2016, as well as different values for generic incumbency advantage--check it out.) A 50% split in 2016 isn't necessarily likely, but it serves to show the way the House is now stacked against the Democratic Party regardless of the national mood: if 2016 were a 50% year, Democrats would take just 191 House seats, or under 44% of the chamber. And it would take a national two-party preference of about 55.8% in 2016 to tip Democrats into a slim House majority--a much bigger wave even than the 2008 Democratic landslide, in which they were preferred by 54%.
The underlying cause of this imbalance is the interaction between demographic sorting and single-winner districts. Democrats, increasingly clustered in urban areas, are naturally "packed" into their districts, meaning their candidates tend to win by larger margins than Republicans: the average Democratic winner in 2014 won his or her race by a two-party margin of 44.1 percentage points, while the average Republican winner won by 39.7 points. But because each district elects just one winner no matter the margin, Democrats' more emphatic victories are meaningless with respect to the makeup of the House. Republicans' leaner margins are more efficient at winning more seats with fewer overall votes. (While intentional gerrymandering is also a factor here, natural patterns of partisan demography are surprisingly powerful on their own.)
This trend was masked for a while by the looseness of the parties' ideologies and more frequent ticket-splitting, with Democratic incumbents able to hold on to seats in relatively conservative districts, especially in the South. But the 2010 election exposed the underlying asymmetry by eliminating nearly all Democrats representing Republican territory--and now, with Republicans enjoying the advantages of incumbency in those seats and ticket-splitting becoming steadily rarer, Democrats are unlikely to claw those seats back in the foreseeable future. Partisanship is now such an effective predictor of House votes that our Monopoly Politics 2016 model confidently projected over 85% of 2016 House races less than a week after the 2014 midterms, using only recent election results as predictors.
The structural bias in the House currently favors Republicans, but this tilt in the playing field is problematic no matter its direction. With the parties increasingly voting as tight units rather than loose coalitions that cut across ideologies, democratic accountability depends on voters' ability to empower or reject the parties as legislative agenda-setters. When even a solid majority of the country can't hope to "throw the bums out" and push control of the House to the other party, the House loses its electoral tether to popular opinion--an alarming reality in the chamber designed to represent the American people. The structural bias in the House is a strong argument in favor of eliminating single-winner districts and instituting multi-member districts with fair representation voting, which would promote meaningful competition in almost every district and ensure the House much more faithfully reflected the will of the nation's voters.
Monopoly politics Fair representation Quick news