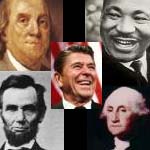 Chosen by such a slim margin in a highly fractured field of candidates, Reagan might not reflect the choices of the majority.  In fact, 76% of voters chose another candidate than Reagan as their first choice. Next year, AOL should consider using a system of instant runoff voting (IRV), which would require voters to rank as many candidates as they chose, and would produce a consensus candidate with majority support. IRV is currently used by Academy of Motion Pictures to decide nominations for the Oscars.