In our final pre-election blog from the non-majority rule desk, evidence of the spoiler effect in this election cycle is still strong: many races remain too close to call, of course, but a dozen or more U.S. Senate and governor’s races may be won with less than a majority of the votes. A brief survey of the country’s races reveals just how significant third party and independent candidates will be in determining the holders of 24 governor’s seats and 19 U.S. Senate seats.

Before going in-depth about the races where independents and third parties are playing the biggest role, let’s review the races that – like the 2000 presidential election – may be tipped by a third candidate who gets a relatively small share of the vote. The Florida governor’s race, for example, has taken a back seat to the high profile, three-candidate race for the U.S. Senate, but the tight race between Republican Rick Scott and Democrat Alex Sink right now is far closer, with FiveThirtyEight projecting 48.8% of the vote going to Sink and 48.6% going to Scott. According to a CNN/Time/Opinion Research poll, 4% of likely voters support another candidate or prefer neither of the two major candidates.

A local poll from Colorado illustrates a similar situation in the U.S. Senate race: Both Democrat Michael Bennet and Republican Ken Buck carry 47% of the vote; 5% support another candidate. Maintaining this pattern, the governor’s race in Georgia shows Republican Nathan Deal and Democrat Roy Barnes separated by 5 points (45% to 40% with a 4-point margin of error) while Libertarian candidate John Monds claims 5% of the vote. In Ohio, the gubernatorial contest between Democrat Ted Strickland and Republican John Kasich is well within the margin or error as Kasich claims 49% of the vote to Strickland’s 47%. 5% of voters support another candidate or remain undecided.

In the U.S. Senate race in California, Democrat Barbara Boxer leads Republican Carly Fiorina 48% to 46%. This small gap leaves more than enough room for the 3% supporting some other candidate to spoil the election one way or the other.

Polls suggest that Nevada’s U.S. Senate race between Republican Sharron Angle and Democratic incumbent Harry Reid is as close as 2 points (48% and 46% respectively). Rasumussen has Angle leading by 4 points, but even this is enough for the 4% favoring another candidate to tip the scales.

Now let’s turn to races where third parties and independents have played a bigger role -- with three candidates polling in double digits, and in two cases, major parties becoming the potential victim of the “spoiler” dynamic.

Colorado: There is perhaps no more fascinating race than the one for governor in Colorado. There, the Republican nominee Dan Maes has imploded, with some polls showing him earning as little as 5% of the vote. What’s fascinating is that the results indicate a kind of “slow-motion” instant runoff. As Maes’ vote has dropped, the vote share for Constitution Party (and former Republican Congressman) Tom Tancredo has risen. Throughout these fluctuations, Democratic nominee John Hickenlooper has maintained a consistent share. See below: 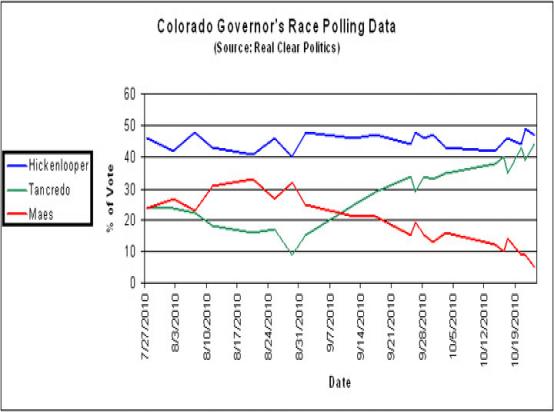 Maine: The Non-Majority Rule desk has watched Maine’s gubernatorial race with close attention because of the fluctuating popularity of Independent Eliot Cutler. Although he had been hovering around 10% to 12% in the polls for some time, he has earned the endorsement of the state’s largest paper (the Portland Press Herald) and in one poll already has rocketed up to 19%, essentially tying with Democrat Libby Mitchell. Republican Paul LePage leads with 32% of the vote—hardly a majority consensus.

Massachusetts: Governor Deval Patrick takes a modest lead in the four-way Massachusetts gubernatorial race according to a local poll: Patrick carries 43%; Republican Charlie Baker carries 39%. Additionally, independent Tim Cahill polls at 8% and the Green Party’s Jill Stein polls at 2%. Cahill’s share of the vote has dropped significantly without seeming to have much effect on the margin between the major party nominees, reflecting his centrist politics.

Rhode Island: The independent candidate Lincoln Chafee is leading in Rhode Island’s gubernatorial race. One poll shows Chafee with 35%, Democrat Frank Caprio with 28%, and GOP candidate John Robitaille with 25%. Moderate Party candidate Ken Block also picks up 6%. This four-way race, as in Massachusetts and Maine, is almost guaranteed to produce a plurality victory instead of a majority considering the number of candidates in the running.

Alaska: On Monday, the New York Times took a look at Lisa Mukowski’s independent bid to retain her U.S. Senate seat as a write-in candidate in Alaska. Republican Joe Miller, who beat Murkowski in the GOP primary earlier this year, has a steadily decreasing lead. Murkowski may be grabbing the spotlight in the final days of the race, but whether her status as a write-in candidate will hurt her chances remains to be seen. Miller, Murkowski, and Democratic nominee Scott McAdams all have the potential to pull out a win – but with far less than 50%.

Finally, echoing stories from earlier this election season, the New York Times featured a front page story on October 22nd paralleling an earlier one on dirty Republican tactics to recruit faux Green Party candidates. Now the Times reports the Democrats numerous attempts to field and fund tea party candidates to siphon votes from Republicans. Among the cases, reports like the one concerning Mayor Steve Pougnet of Palm Springs, California are particularly indicting of the Democratic Party and our current plurality voting system because of how openly the perpetrators are scamming voters:

“Republicans have received recorded phone calls from a professed but unidentified ‘registered Republican’ who says she is voting for the American Independent Party’s candidate for a House seat, Bill Lussenheide, not for the incumbent Republican, Mary Bono Mack.  The caller says she is voting that way because ‘it’s time we show Washington what a true conservative looks like.’ The recording was openly paid for by the Democratic candidate for the seat, Mayor Steve Pougnet of Palm Springs.”