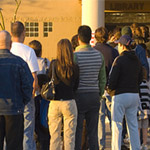 FairVote released the National Edition of a report series that seeks to shed light on the practices of county election officials responsible for running efficient elections this November. The report, “Uniformity in Election Administration: A Survey of Swing State County Clerks–National Edition,” shows that the largest counties in 10 swing states may fall short in allocating enough machines and some students may face Election Day problems due to an insufficient number of on-campus polling places. With turnout in swing states expected to rise to unprecedented levels, FairVote is making every effort to ensure voters don’t run into roadblocks this Election Day. In the report, we offer a series of conclusions and recommendations about what states can do to have a transparent process and prepare for what could be the highest voter turnout in modern presidential election history. Reports on Missouri, New Mexico, Colorado and Virginia election preparedness were released earlier this fall.