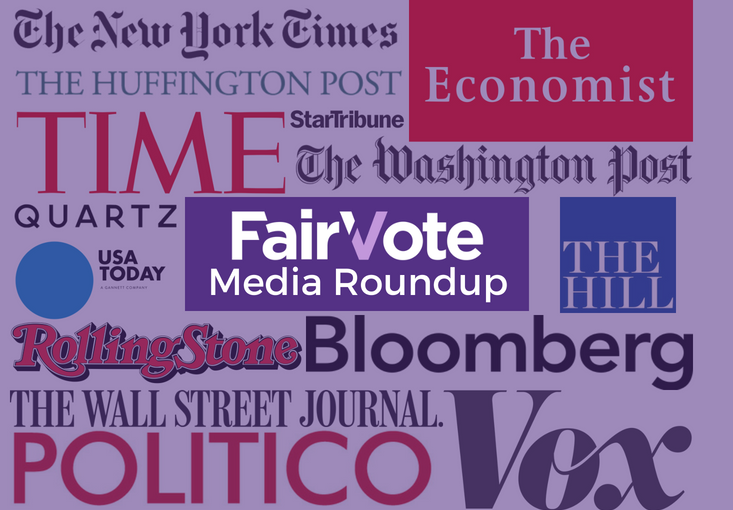 One Reform to Save America, New York Times (May 31, 2018)
Opinion piece by David Brooks highlights ranked choice voting and the Fair Representation Act as crucial reforms that could fix our politics.

In San Francisco, being everyone’s second choice can make you Mayor, Slate (June 6, 2018)

News about the importance of voters ranking candidates in order of preference because second choices matter.

Why ranked-choice voting should be used throughout California, San Francisco Chronicle (May 25, 2018)

Larry Diamond’s op-ed highlights the mayoral race in San Francisco using ranked choice voting and how the voting system would have an impact on the state of California.

Rival Candidates try an unusual election message: Vote for both of us, The Atlantic (May 28, 2018)

Two candidates running for mayor of San Fransisco are endorsing each other in the city’s ranked choice voting election.

Ranked-choice voting is key to a healthy future for democracy, so vote ‘yes’ on Question 1, Portland Press Herald (May 30, 2018)

Jon Fishman, drummer for the band Phish, pens an op-ed in support for Question 1 and encourages readers to vote yes.

Charlotte Hill writes about the new style of voting that San Franciscans will have, explains what ranked choice voting is, and explains how RCV changes the incentives of political elites.

In the next regular city election, set for late 2019, Las Cruces voters will see a different kind of ballot. Las Cruces becomes the second city in New Mexico to adopt ranked choice voting.

Northern California is Voting Better and it’s time the rest of California caught up, Los Angeles Sentinel (May 31, 2018)

Glenton Richards writes an op-ed in support of bringing ranked choice voting to the state of California and encourages politicians to adopt RCV.

A group of Massachusetts politicians and government reformers wants to change the way elections are conducted, and it could be looking toward a 2020 ballot initiative to do it. Voter Choice Massachusetts is a growing coalition pushing for the adoption of ranked-choice voting.

Article: Cities across the country are warming to the benefits ranked-choice brings, and New York City could soon join their ranks, boosting the profile and potential of this alternative approach to elections.