“The foundation of American democracy rests on the consent of the governed.” These words, quoting the Declaration of Independence, begin the brief of FairVote and One Nation One Vote as amici curiae (“friends of the Court”) in Gill v. Whitford, the first federal case to identify partisan gerrymandering as a violation of constitutional rights, now on direct appeal in the Supreme Court of the United States.

FairVote has long criticized gerrymandering in all forms -- including political gerrymandering to help one party or help incumbents. We argue that ranked choice voting combined with multi-winner districts is the best way to ensure that all voters have a voice and a vote that counts no matter who draws the lines. Our amicus lays out our argument more fully, as I explain below. Read our brief in full here, or at the bottom of this blog post.

As stated in our brief, “voting is the critical way in which we express our political associations and beliefs.” By singling out groups based on those associations, partisan gerrymandering strikes at the heart of First Amendment values.

Partisan gerrymandering is the manipulation of the districting process to give one political party an unfair advantage. The Court has said before that this may be a constitutional violation, but has never before announced a standard for how courts can determine when it has occurred. In the absence of such a standard, states have brazenly engaged in partisan gerrymandering without any legal consequences.

Much of the coverage of this case has centered on the second element, effect, and in particular on the metric the plaintiffs relied on to measure the degree of partisan advantage: the “efficiency gap.” The efficiency gap is essentially a way to measure the difference in the share of “wasted votes” for each political party.

In this context, the term “wasted votes” is not just a figure of speech. It is a clearly defined metric used in political science. Votes are “wasted votes” if they are surplus votes, in excess of what a winning candidate needed to win, or if they are cast for any losing candidate. FairVote has tracked and highlighted wasted votes for years in our series of Dubious Democracy reports first published in 1994.

If there are lots of wasted votes cast for Democrats, then that means that a large number of votes for Democrats will elect a small number of Democratic candidates. If in the same state there are very few wasted votes cast for Republicans, then that means that a smaller number of votes for Republicans will elect a larger number of Republican candidates. The Republican votes in such a state are more efficient than the Democratic votes. That’s why the measure is called the efficiency gap.

The efficiency gap is a useful measure, though not without its flaws, but it is not the only one. The lower court in Gill v. Whitford did not make it the linchpin of the case, but it did find that a high efficiency gap is evidence of effect.

Because of the three part test and the high standard of evidence for finding partisan gerrymandering, the case, if successful, will not revolutionize the state of districting on its own. It will set a standard that states will take into account during districting. It may create incentives for states to adopt more fair structures. And, as we describe in our brief, it may provide states and courts with a hook to look beyond the winner-take-all single-winner district system.

Our Argument to the Court

Part I of our brief describes how partisan gerrymandering undermines the vision of representative democracy in the United States. For legislators to single out a class of voters in their state and intentionally make their votes less effective in order to help their own political allies goes beyond ordinary politics. It is an unjustifiable violation of the rights of those voters.

Often, the approach used by states to avoid partisan gerrymandering by either party is to take the task of districting away from politicians and delegate it to an independent commission. This generally does mean that the “purpose” element of the three-part test above will not be met. However, it does not necessarily mean that the “effect” will not remain. Fortunately, there are structural solutions to partisan gerrymandering that promote fairness and competition, effectively remedying the harms that we associate with gerrymandering.

The best option for American elections is ranked choice voting in multi-winner districts (also called “single transferable vote). It has a long history of use in the United States (continuously in at least one city for more than a century) and is used for national and local elections in many nations around the world. Part II of our brief describes how states and courts can use such a  fair representation voting system to remedy the harms of gerrymandering.Introduced in Congress this year, the Fair Representation Act (HR 3057) provides an excellent model for how ranked choice voting in multi-winner districts makes partisan gerrymandering infeasible. 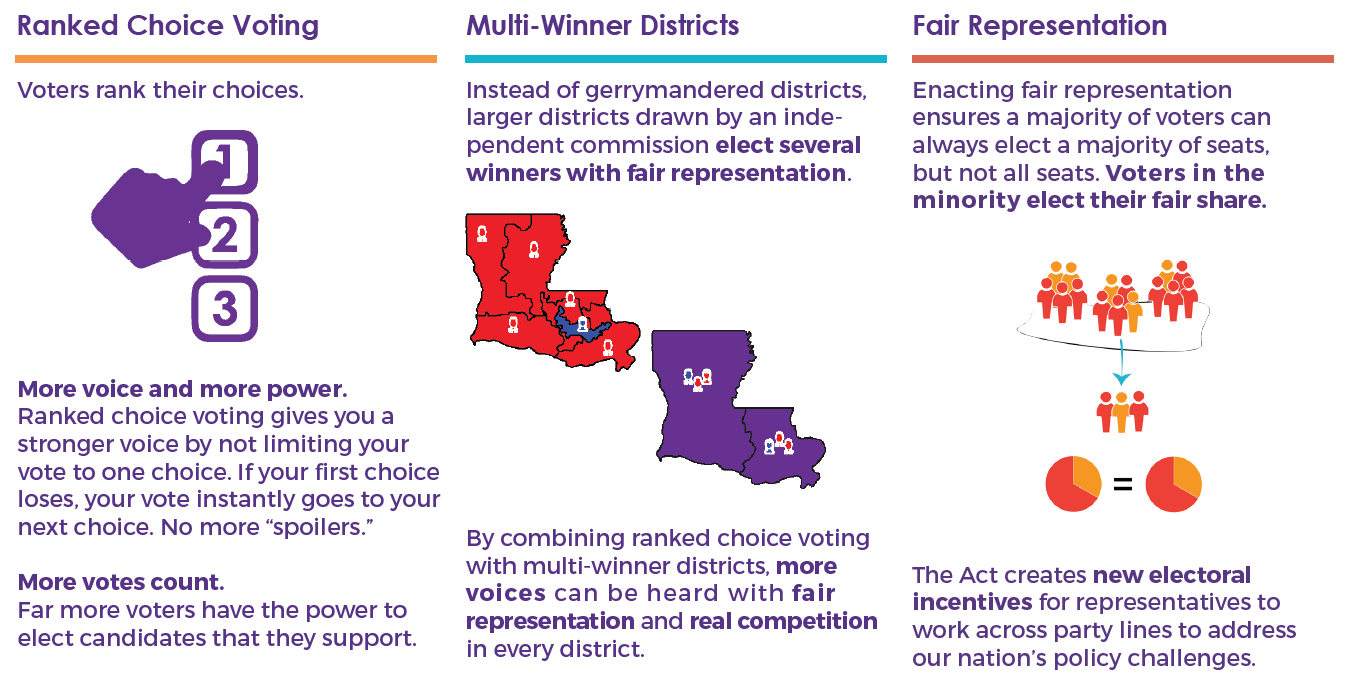 On the other hand, the round-by-round vote counting in ranked choice voting is laser-focused on making every vote count. If your first choice wins with extra surplus votes, then they will only get as much of your vote as they need, with the rest counting for your next choice. If your first choice has the fewest votes and loses, then your vote will count for your next choice. This video demonstrates the process.

With ranked choice voting, if three candidates will win in a district, then the number of wasted votes gets cut in half: only 25% of votes. If five will win, the standard used in the Fair Representation Act, then fewer than 17% will be wasted. Each political party will have a roughly equal number of wasted votes, because that number will be as close to zero as is mathematically possible. To the extent it is even possible to gerrymander, doing so is far harder and less effective in multi-winner districts, in which districts are larger and more heterogenous.

As the brief describes, once a national legal standard exists to identify partisan gerrymanders in court, states may adopt these much fairer systems on their own. For those who do not, they may form the basis of settlement agreements after a lawsuit is filed - indeed, that approach has led to the adoption of fair representation voting in over 100 jurisdictions after lawsuits brought under the Voting Rights Act. Finally, courts can include these methods as remedial options themselves; because they do not rely on district lines, they allow courts to impose an effective remedy without having to make the political tradeoffs inherent in the districting process. They free the courts from the “political thicket.”

Gill v. Whitford has the potential to be a game-changer. Finding a judicially manageable standard for claims of partisan gerrymandering has been called the “holy grail” of election law. It will not resolve partisan unfairness or lack of competition itself, but it will be a step toward fair elections and may set the stage for states, courts, and the federal government to look beyond winner-take-all elections to something more fair. In that way, it could move the nation toward a government that can truly be grounded in the “consent of the governed.”

Read the brief of FairVote and One Nation One Vote as amici curiae below: