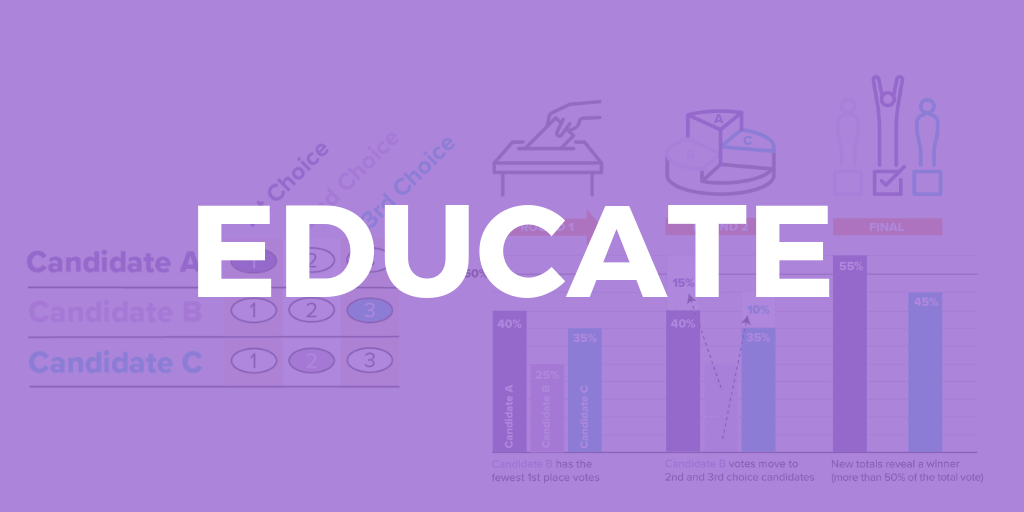 After you have begun to organize a core group of supporters, one of the most essential tasks for your campaign to be successful is community education. Whereas voters are more or less aware of the issues that affect them in most elections, in trying to bring RCV to your elections, there will likely be a large number of voters who have never heard of ranked choice voting or who have a sense that they aren't being represented as well as they could be but aren't aware of what alternatives exist.

How effective you are at educating the electorate about RCV will largely be dependent on how familiar you are with RCV and how well you can communicate that to others in a way that makes sense to them.

Since you're here looking at our Toolkit, you've probably got a pretty good sense of the answer to that question. When we at FairVote talk about ranked choice voting, we are talking about any election in which voters rank their selections and the lowest first-place vote recipient is eliminated with their votes reassigned to the voters' second choices, until all the winners have been selected. RCV can apply to single- or multi-winner races. The single-winner version is sometimes called instant runoff voting (IRV) and the multi-winner version is sometimes called single transferable vote (STV). For the sake of simplicity and not confusing voters, however, we usually simply say "RCV" or "multi- or single-winner RCV".

With the introduction of the Fair Representation Act in Congress this year, it is also worth noting that RCV might be applied to the FRA. This is because the FRA would bring ranked choice voting to all congressional elections. States with only one representative in the House would use single-winner RCV; every other state would use multi-winner RCV, including states with more than five representatives, which would also have independent redistricting commissions determine the boundaries for larger super-districts, from which three to five representatives would each be elected.

These are valuable distinctions to understand, but the easiest way to convey what RCV is and how it works (besides referring to the handouts available in the Toolkit section of the same name) is to tell them it's as easy as 1, 2, 3, and then to demonstrate it in action.

Here is an example video of how to run a mock election, be it to select a community's favorite beer, ice cream, or anything else!

Who you're speaking to about RCV can determine how you frame your discussion. While RCV is great for solving a number of problems with our electoral system, different groups see different benefits for themselves. Instituting RCV won't immediately solve problems that each of these groups see as priorities, but it will open the door for policies that would be politically impossible in our current system by changing the incentives and opening the door to voices that are sometimes excluded in the system we have now.

The party in power vs. the minority party vs. third parties

If you're trying to pass RCV for your elections through a legislative body, such as a city council or state legislature, that means you will necessarily have to convince politicians who currently have power that it is the best decision for them. Sometimes, this can mean that while you would like to institute multi-winner RCV, you have to be prepared to compromise to single-winner, if that's all that they're willing to support. In other instances, this may mean appealing to the elected official's sense of justice and morality, focusing on the inadequacies of the current system and the ways in which RCV will improve them. Other times, this may mean playing up their support in the community: "RCV will make politicians more accountable to the people they serve, but your constituents have elected you every time you've run. You have nothing to fear and everything to gain from supporting this change to our broken system." Another case may call for increased pressure, demonstrating support from their constituents for such a reform. Still another might focus on the great press politicians receive when they enact changes that increase accountability and (small d) democratic engagement. Each case is different, but speaking to politicians in power is very different from speaking to those on the outside looking in.

Politicians in the minority may feel that their support in the community is not adequately reflected in the current governing body, and emphasizing the ways in which RCV can help better reflect the community might be useful here. Emphasizing the ways in which RCV increases the civility of campaigns may also be effective, as doing so would help to eliminate stark "with us or against us" attitudes that polarize the electorate.

Finally, third parties that are rarely taken seriously in many elections are obvious targets to get on board early, as they are some of the biggest victims in the current first-past-the-post plurality system. With them, playing up the removal of the "spoiler" effect and the ability of voters to vote their true preference, rather than being forced to vote for the "lesser of two evils", is often a winning strategy.

Each elected official, in addition to their party loyalties, have a number of factors that go into each vote and decision made. Identifying key people to get on board and what issues are most important to them can often be critical in moving along your legislation. This will include the chair of the committee that legislation may be sent to as well as party stalwarts. As described above, winning strategies will vary from representative to representative, but in general, a good formula to follow is emphasizing how RCV is good for democracy, how it might potentially help them enact their agenda, and how the people they represent already support it.

Election administrators can also play a decisive role in whether or not RCV is ultimately adopted. These are professionals who have often developed close relationships with the elected officials in question, so being able to demonstrate to them the resources that are available to assist with implementation, especially through the Ranked Choice Voting Resource Center, can be the difference in whether or not they suggest switching to RCV to the legislators. Working through questions and concerns early on in the process, like the ability of the equipment currently in use to run an RCV election or the training necessary to educate the public and other administrators, can build trust and make allies of another group with a significant stake in the functioning of the electoral system.

FairVote, in conjunction with the RCVRC, can help provide election administration and legal assessments to ease concerns and identify obstacles early, so that they can be planned and organized around.

Historically disenfranchised and underrepresented groups, such as people of color and women, are among those most likely to benefit from the adoption of ranked choice voting. There are a number of reasons for this. For one thing, RCV results in elections that are more representative of the community. This means votes will not be split among similar candidates, and especially in multi-winner races where the threshold for election is less than 50%, minority groups' representation can be proportional to their size in the community. Another key way these groups benefit is through more civil, issue-focused campaigns. Because women and people of color are disproportionately targeted by personal attacks, this return to civility increases the incentives for women and people of color to run, and once they do, also increases the likelihood that they will win. Emphasizing this can help get groups who are already organized around issues relevant to these communities on board with your campaign, in addition to key individuals who are similarly motivated.