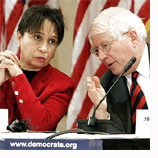 The DNC commission on presidential nomination timing and scheduling approved their final report over the weekend. On one hand they didn"t go far enough, on the other they urged future commissions looking at this question to consider the one plan FairVote is excited about: the American Plan.

For all the talk about the problems of front loading (where states push their primaries up to the front of the schedule hoping to garner influence) 2008 is likely to have the nomination all but settled by early February. That"s a full month before the candidate was realistically settled in 2004!