FairVote conducts an IRV straw poll each year at the Take Back America conference. This year, like last, we asked participants to vote for their presidential favorite.

Barack Obama beat Al Gore in the seventh round of counting. Under winner-take-all rules, Gore would have won with 24% of votes. Strong support for Dennis Kucinich ultimately broke in favor of Obama.

Last year, Gore beat Feingold in the ninth round of counting, when Obama supporters broke for the former Vice President.

Instant runoff votes tell us more about voter opinion than traditional "check off one" questionnaires. While Gore and Obama were roughly neck and neck in the first round (16 votes to 14), and while Gore's support intensified relative to Obama's as other candidates were eliminated, Obama ultimately had broader appeal, especially among Kucinich partisans.

Politico.com ran a two-choice poll throughout the conference, which Obama also won. Kucinich interestingly didn't exhibit the first-choice support in their poll that he did in ours. Maybe the ability to rank as many candidates as one wants, or the knowledge that successive rankings actually would count, made voters less risk-averse.

What the poll established is that Obama, Edwards and Clinton form a clear first tier of presidential candidates among progressives, pollster Stan Greenberg said. But unlike many national polls that show Clinton in the lead, people polled at the Take Back America conference showed a strong and interchangeable preference for Obama and Edwards.

Conference participants chose Howard Dean in 2003, Edwards for VP in 2004 and Edwards for President in 2005.

There was a debate about whether to put Gore on the ballot. It will be interesting to know how things would have panned out in his absence, and IRV lets us do that. Stay tuned for more analysis. 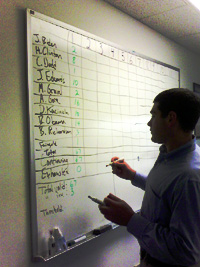 Here's me beginning the big vote tally at the home office.