By: Dania Korkor, Legal Analyst, FairVote
On January 21, 2015, I spoke among a determined group of U.S. representatives and advocates and announced our support for an explicit right to vote in the U.S. Constitution during a Press Conference to reintroduce the Pocan-Ellison Right to Vote Amendment. U.S. Representatives Mark Pocan (D-WI) and Keith Ellison (D-MN) introduced this bill to the 113th and 114th Congresses with 26 and 21 cosponsors, respectively. Alongside Representatives Pocan and Ellison, speakers included the Rev. Jesse Jackson Sr., prominent civil rights activist and Founder and President of the Rainbow PUSH Coalition, Representative Steve Cohen (D-TN), and Julie Fernandes, senior policy analyst at the Open Society Policy Center. FairVote is proud to have supported this important goal since the first Right to Vote Amendment was introduced in 2001 and continue to support it today. 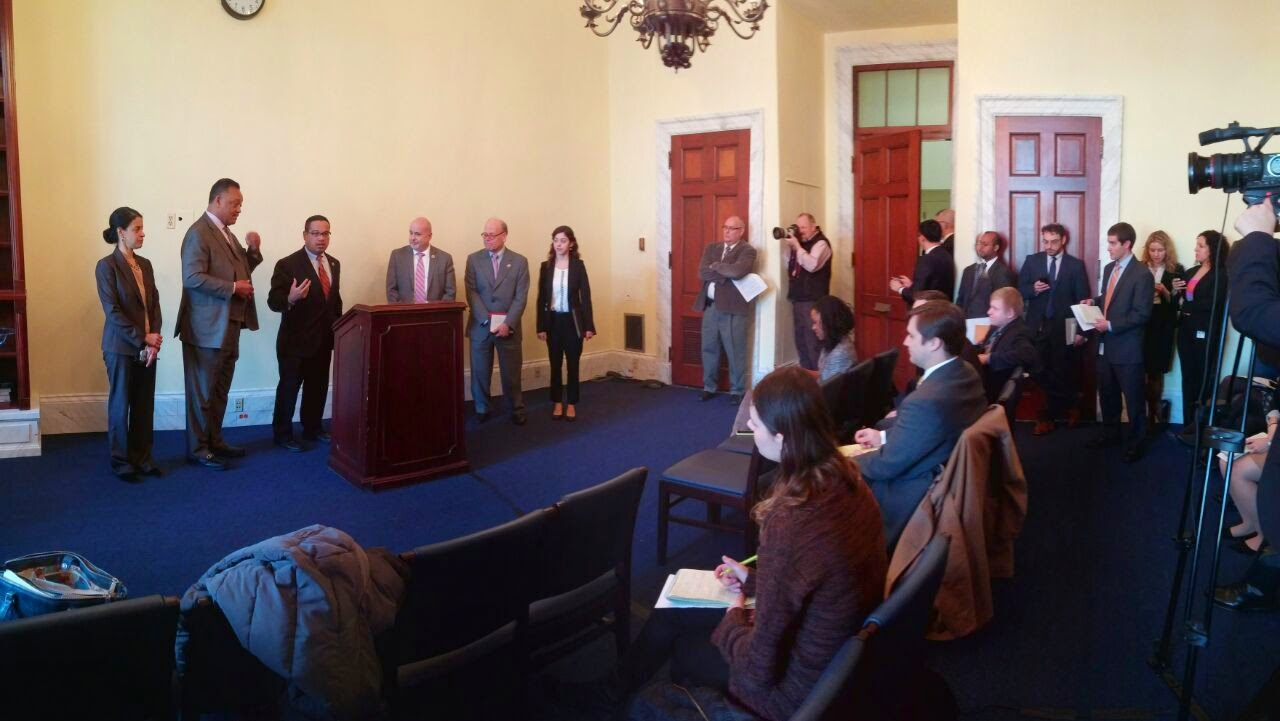 This Right to Vote Amendment aims to amend the U.S. Constitution to provide all Americans an affirmative right to vote and empower Congress to protect this right. The effects of not having a right to vote in the constitution are overwhelming and expansive. Take, for example, the harmful impact strict voter ID laws have upon voter participation. Eleven percent of Americans do not have government-issued photo ID. Some populations lack these documents at even higher rates. Nationally, 25 percent of African-Americans, 16 percent of Hispanics, and 18 percent of Americans over age 65 do not have such ID. A constitutional right to vote would require that state governments ensure that voter’s access to the polls are protected and that eligible voters are provided necessary IDs before implementing voter ID laws. The amendment would also allow Congress to enact minimum electoral standards and provide our courts with the authority to keep politicians in check if they try to game the vote for partisan reasons.

FairVote currently is leading a project called “Promote Our Vote,” which was born out of an effort to build a grassroots call for an explicit, individual right to vote in the U.S. Constitution. This movement is being advanced through “Right to Vote” resolutions passed by local governments, which call on Congress to enshrine voting as a right and lay the groundwork for the highest degree of legitimacy, inclusivity, and consistency in our democracy.
Read more recent news on this issue from John Nichols of The Cap Times, Miya Pontes of the Campaign for America’s Future on Truth-out.org, Adalia Woodbury of PoliticusUSA.com, and Katie Mulvaney of PolitiFact.com. Check out photographs from the press conference and the full video.
Visit our websites for more information: www.RightToVoteAmendment.com and www.FairVote.org.