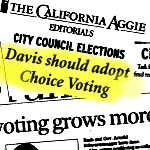 The Davis, California City Council is poised to vote on whether to launch a referendum on the choice voting method of proportional voting for city elections. Should the measure pass, voters in the city would have the opportunity to vote on an advisory question about whether to switch the city's elections to choice voting.

As reported by the Sacramento Bee:

Specifically, the measure would ask if voters want to replace the traditional system, under which the candidate with the most votes wins, with "choice voting,".... Under choice voting, candidates are ranked by voters' preference. If a voter's top preference doesn't win, the vote goes to the candidate marked as the second preference. The issue came to the council as a recommendation of a task force that was impaneled in 2004 to study a number of issues related to city governance.

Davis would have to become a charter city, a switch that would require a binding city vote or passage of a state law, before choice voting could be put in place.

This debate was prompted in large part by the efforts of students at the University of California - Davis, who adopted the system for use in campus elections. Based upon the success at their school, the students urged the city's charter review commission to take up the matter. Upon studying the benefits of choice voting on fair representation and voter choice, the commission unanimously to recommend choice voting for Davis, CA.

Choice voting has a successful history of use within the United States and abroad and has been in use in Cambridge, MA for several decades now. The system holds great potential at solving many of our nation's problems with lack of competitive elections and under-representation of women and communities of color. The Davis story shows that with a dedicated group of advocates, choice voting and other electoral reforms can be sold on their merits and advanced for local elections.