Today is a big day for movie fans as the Academy of Motion Picture Arts and Science announces the nominations for award categories from Best Picture to Best Sound Mixing. The nominations are packed with major blockbusters like Mad Max: Fury Road to lesser known critically acclaimed films like Room. You may recognize a couple of your favorites on the list. Some nominees may leave you asking how does the Academy choose which movies grab these coveted spots in each category?

The Academy is made up of over 6,000 voting members, including the most credentialed actors, writers, directors, and other professionals from across the industry. For decades, the Academy has used for nearly all nominations (including all major categories except Best Picture) the "multi-winner" form of ranked choice voting FairVote supports for legislative elections because it wants as many Academy voters as possible to have a hand in directly nominating one of their favorites in their category of expertise--actors voting for actors, film editors voting for editors, and so on.

The Academy ranks their choices 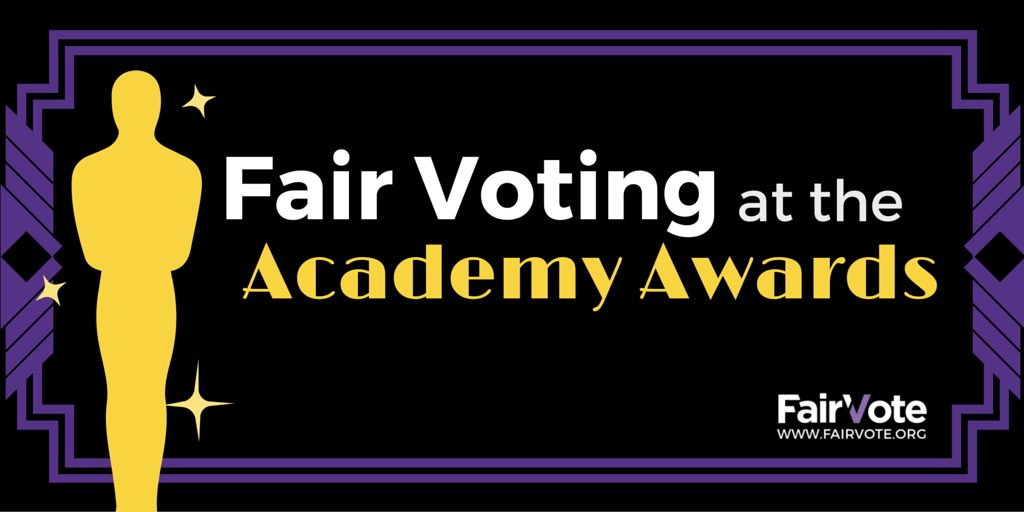 Academy members can rank as many as five choices on their ballot in order of preference, and their ballot counts until all five nomination slots are filled. For most of its history, Best Picture was nominated this way as well, but modified the process somewhat starting in 2011 which is why the number of nominees in that category may vary from 5 to 10, but the same principles of proportional representation are used. By ensuring that more Academy voters have their vote count toward “electing” a nominee, the Academy ensures that almost everyone will have a movie, actress/actor, director, etc, near the top of their rankings that is in the hunt for an award for a given category.

In a vote for one system Academy voters would be faced with tough considerations. For one, voters would not have the freedom they currently do to vote for more obscure options that they think are deserving of a nomination, for fear of wasting their one vote on a movie or actor that has little chance of being nominated. Instead, voters can indicate their sincere favorite to be nominated, while remaining confident that they will have a voice throughout  the nominating process if their favorite doesn’t have enough support to win. The system also eliminates strategic considerations for voters, as surplus support for a candidate that has already been nominated is not wasted, and can help nominate other worthy candidates in a category.

A History Of Fair Voting

Fair voting empowers voters. Since 1941 Cambridge has elected its nine-member city council and six-member school committee in citywide ranked choice voting elections. Fair voting in Cambridge works to give voters a full range of choices and representation to political and racial minority groups.

Fair voting systems have been part of the Oscars nomination process from the start, as nominees have been selected using ranked ballots since the 1930s. Last year, like most years, blockbuster hits shared the Best Picture stage with arthouse films: The biographical war drama American Sniper was nominated alongside the intimate coming-of-age story Boyhood, with the experimental single-take Birdman eventually taking the top prize.

The Academy’s use of ranked ballots doesn’t stop with the nomination process--stay tuned as our “Oscar Votes 1, 2, 3” blog series analyzes the use of ranked choice voting to select the winner among this year’s eight nominees for Best Picture. With the nominees now released, be sure to participate in our ranked choice voting polls for Best Actress and Best Actor, and look for further analysis as the results come in.