Odds are, according to British bookies with their fingers on the nation's pulse, that the United Kingdom is headed for another five years of coalition government. Like the 2010 election, the upcoming May 2015 election is shaping up to deliver no single party a majority of seats in the House of Commons.

The absence of a single majority party in the nation's lower house is a big deal in the UK. In its Westminster parliamentary system, a majority of members of the House of Commons must be aligned with the Prime Minister at all times. The Prime Minister, and the Cabinet he or she has chosen, only serve as long as they continue to command the "confidence of the House".

When one of Britain's cohesive and disciplined political parties controls a majority of the seats, the Westminster system provides for a stable and efficient government centered around a powerful Prime Minister. This form of the Westminster System has been the envy of many American political scientists as well as former President Woodrow Wilson. However, when no single party controls a majority, the Westminster system becomes unstable. Terms like "hung parliament" and "minority government" are uttered in hushed unsettled tones steeped with trepidation, for all that is needed to unseat a Prime Minister is a vote of no confidence in the House of Commons. The Prime Minister dismissed by a no confidence motion most recently, James Callaghan, was dismissed in 1979 during the last period of –– you guessed it  –– minority government.

If no party wins a majority, Election 2015 will ring in the second consecutive term of minority government in the House of Commons. With the exception of a short, tumultuous period in the 1970s, which saw a rapidly depreciating British Pound, unrest in Northern Ireland and industrial strife during the Winter of Discontent, the United Kingdom had witnessed a long period of strong majority governments since World War II. However, strong majority governments in the future seem less likely.

The recent hung parliament, and the likelihood that the next parliament will also be "hung", ought to be understood as a failure of winner-take-all (called "first-past-the-post" in Britain) to deliver on one of its key promises. One of the few advantages of winner-take-all, other than the system's simplicity, is its ability to produce decisive legislative majorities. In a nation with  an entrenched two-party system and little spatial diversity, winner-take-all can often deliver decisive legislative majorities (at the expense of the representation of minorities, mind you). However, in increasingly diverse nations, like the United Kingdom (as well as Canada), in which regional parties and identity politics have significant appeal, winner-take-all can no longer tick this box.

For decades, winner-take-all elections in the United Kingdom have delivered parliaments that are wildly disproportionate to the ballots cast by voters. In the aftermath of the 1983 election, in which Margaret Thatcher's Conservative Party won 61% of House of Commons seats with 42% of the vote, while the SDP-Liberal Alliance won less than 4% of seats with over a quarter (25%) of the vote, Britons began calling for proportional representation (PR). Early proponents included Monty Python's John Cleese.  Since then, seats won have remained disproportionate to votes cast. In 2010, the two major parties both won larger shares of seats than their vote shares: The Conservatives received 36% of the vote and won 47% of the seats; the Labour Party received 29% of the vote and won 40% of the seats. 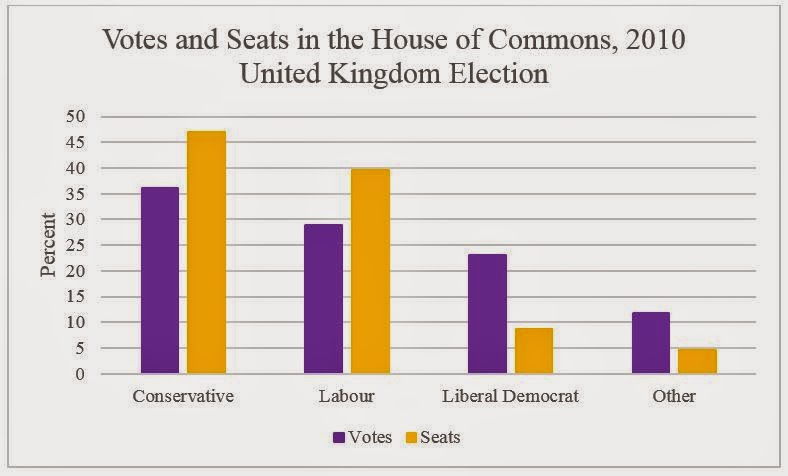 In 2010, over half of all votes were wasted, cast for losing candidates. Unsurprisingly given this mistranslation of votes into seats, voter turnout in Britain has declined in recent decades: from an average around 75% of the voting age population in the 1970s and 1980s, down to 61% in 2010.The winner-take-all system, in combination with low voter turnout, meant that, in 2001, only 99 Members of Parliament (15% of 359 MPs) were elected with the support more than a third of eligible voters (Electoral Reform Society, 2004, p.6).

While the movement for electoral reform suffered a setback during the 2011 referendum on ranked choice voting, the 2015 Elections will likely once again reinvigorate the movement, showing that PR is the only way to fix what ails British politics.